Home > Toddler > Development and promotion of the toddler > Sleeping Through The Night In Young Children: A Maturation Process In The Brain 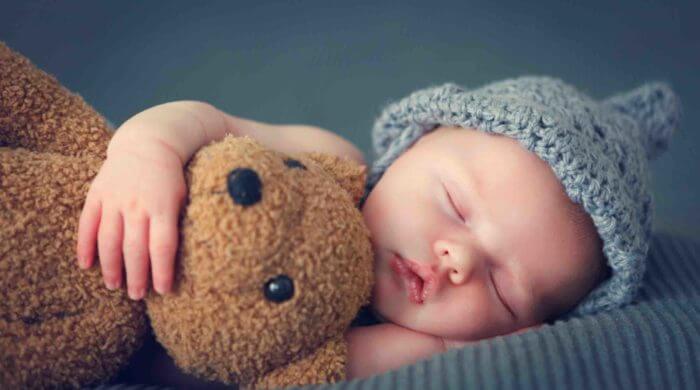 Babies sleep differently than their parents do. Their change between sleep phases (deep sleep and dream phases) is much shorter, so they fall into restful deep sleep more quickly than we do. That’s why a baby’s first year of continuous sleep of six hours is considered sleeping through the night!

Sleeping Through The Night: Baby’s Sleep Is Different

Once again crying in the baby monitor – your own child still does not sleep through, the recommendations for sleep training are often not far. However, I would like to ask exhausted parents not to leave their children alone, but to lovingly support them in their development even at night. After all, sleeping through the night is not something that can be trained, but rather a maturation process of the brain. As a consolation for all parents with sleep deficits, I would like to say that sleeping through the night does not mean that children sleep through from eight to eight, but rather six hours at a time!

In any case, sleep research has shown that only certain developmental processes in the brain ensure even distribution and smooth transition between these phases. Without it, children wake up at each change instead of sleeping continuously. And during the growth of new teeth or other exceptional situations, sleeping through the night is out of the question!

The Connection Between Sleep Requirements And Sleeping Through The Night

In any case, the total sleep requirement also varies extremely: the range of the required sleep hours for children from 0-24 months lies between just under ten hours per day including daytime sleep and 20 hours. Therefore, for children who not only simply wake up at night and need comfort or something to drink, but instead play and stay awake for hours instead of sleeping through the night, it should be considered whether they are perhaps lying in bed for too long overall?

For example, to get close to sleeping through the night, my little one at just under two years old currently only needs an hour of sleep at noon and about 9.5 hours at night! So if I put him to bed earlier, “because children are supposed to go to bed at night,” but still didn’t wake him until seven to go to daycare, he would be awake for about one to two hours at night.

Baby Sleeping Through The Night Could Also Be Dangerous!

Some researchers also claim that not sleeping through is a kind of safety precaution for little ones. The younger children are, the more likely they are to still have breathing pauses at night. Skipping breath for up to 15 seconds is probably still normal, but longer than that can be dangerous – depending on the oxygen levels in the blood. Sudden infant death syndrome lurks! So instead of continuing to doze off (or “finally sleep through it!”), babies wake up and consciously continue to breathe.

This has been found in animal studies. The ability to wake up in the event of such an alarm is reduced if the baby is wrapped up too warmly, has a fever, or has already breathed oxygen-poor air (e.g. prone position, blanket over the head). More information about this can be found at rabeneltern.org under this link.

Sleeping through the night should not be expected, but should be arranged with the sleeping behavior of the child. Under no circumstances should the advisors on learning to sleep be believed, no matter how much they are propagated (here, for example, in Focus). After all, this article also states that only 50% of children up to two years of age sleep through the night, and that 38% of all children up to three still crawl to their parents at night. That’s comforting, we’re not alone!

Also interesting:
What Does Crafting With Toddlers Have To Do With Your Child's Healthy Development?

1 thought on “Sleeping Through The Night In Young Children: A Maturation Process In The Brain”