Home > Toddler > Development and promotion of the toddler > Brushing Toddler’s Teeth: The Battle For Parental Patience 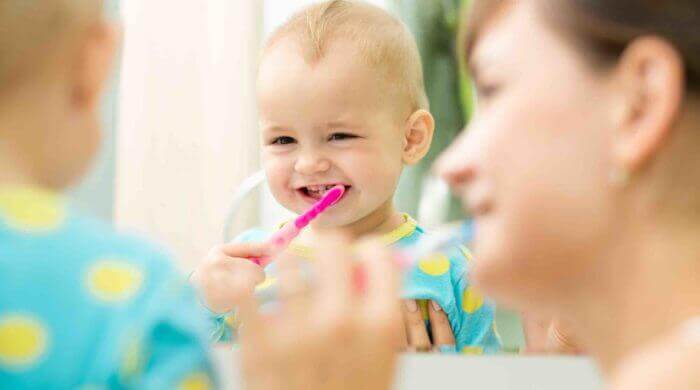 Plenty of good tips are offered for caries prophylaxis, from flea tablets to trick bacteria to a snappy little song. But some toddlers still refuse to brush their teeth. What can parents try and how urgent is brushing children’s teeth? Does it even justify the evening struggle for the toothbrush?

For a while, my little one was thrilled: the toothpaste was delicious, the toothbrush was held by a dragon, and mom always joined in nicely. He chewed on the brush, sucked the toothpaste out of the bristles and had run out of the brush after two weeks without any significant toothbrushing success. On the contrary, his gums started bleeding more and more until I took up brushing. Since then, his oral flora has been strengthened, but the screaming every night is great.

Also interesting:
Sleeping Through The Night In Young Children: A Maturation Process In The Brain

Is Tooth Brushing Really So Important For The Youngest Children?

Medical opinions differ just as much as parental opinions when it comes to brushing toddlers’ teeth. One thing is certain: fluorine is important, but it should not be overdosed. Enough fluorine is contained in a pea-sized amount of toothpaste for babies. With a few tricks, however, lack of tooth brushing can be somewhat put into perspective: Give water to drink after meals, which at least dilutes the acidity in the mouth. In the evening, instead of struggling to brush your teeth, give chamomile or fennel tea to disinfect the oral cavity a little, like a lukewarm mouthwash. However, the gums need the massage to strengthen, so the child must then already nibble hard edges of bread or raw carrots.

When Brushing Teeth Is Refused: What Can We Do?

If parents have decided that brushing is useful even before the first understanding of instructive stories, then they need to get creative. Brushing teeth with a ditty didn’t do anything for us because, just as with the stories, my little one didn’t associate the lyrics with brushing his teeth and continued to cover his mouth. A hand puppet for brushing his teeth he snatched out of my hand and usually the fuss about holding the toothbrush puppet was just as big as the screaming about brushing his teeth afterwards (more tips here).

Also interesting:
Safety Begins Within Your Own Four Walls

If brushing teeth is still a problem, you can at least make sure not to give the child sugary or fruity foods all the time. At the age of one or one and a half, children can go an hour or two without the usual snacks in the playground. Then brushing teeth in the evening can also be seen as a bit more playful again for the time being, says zahngesundheit aktuell, for example.