Home » Baby » Baby health » Angelica Balm For Baby: Why The Ointment Is An Insider Tip For Colds 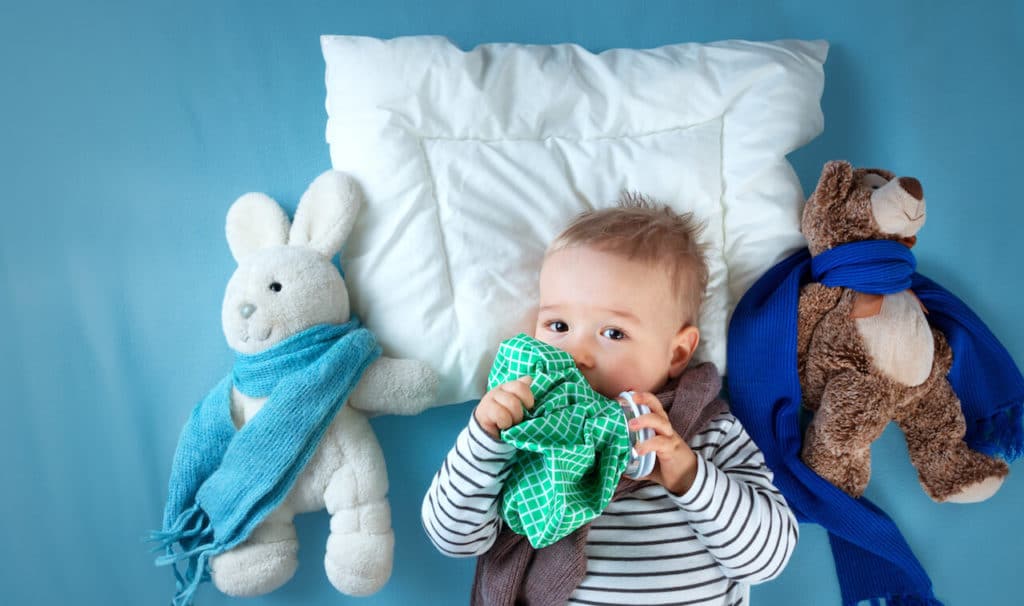 Most certainly the midwife Ingeborg Stadelmann had something in mind when she developed the angelica balm. As an expert in obstetrics, her focus was particularly on homeopathy and armatherapy.

Thus, with the angelica balsam for the baby, she succeeded in producing a natural product that should make breathing easier. Provided that you apply the angelica balm to the baby with a cold correctly. Here you will learn how to do it.

What Angelica Balm Can Do

Angelica balm for the baby is particularly gentle and acts in a natural way. Over the years, the composition of the preparation, originally developed by Ingeborg Stadelmann, has constantly evolved. There have long been different versions of the balm.

As before, the product has an expectorant effect, it facilitates expectoration and thus contributes to freer breathing when your baby has a cold. Moreover, the positive effect of angelica balsam also alleviates other cold symptoms. The special composition is, among other things, what makes angelica balsam so valuable for the baby.

Recommended Even Though It Contains Menthol?

In addition to angelica root, the special ingredients of angelica balsam include wool and beeswax as well as selected high-quality essential oils. Thyme, marjoram, St. John’s wort in olive oil, and menthol are not among the typical substances often found in baby products.

Mainly because menthol in particular could be relatively pungent and therefore dangerous for infants. However, the conception of angelica balm for the baby is so gentle that it ensures excellent tolerance.

Also interesting:
The Right Oral Hygiene Even Before The First Tooth

As helpful as angelica balm is, at the same time it is important that you also know the following about the preparation that is supposed to help your infant with colds.

That Is Why Angelica Balsam Is So Popular

Even the name angelica balsam has something magical about it. Nevertheless, angelica balm for the baby is by no means a “miracle cure”. From one day to the next, the cold symptoms of your baby with a cold will not disappear.

But they can certainly be alleviated. Breathing will be easier for your little darling, which is also relevant for falling asleep and sleeping through the night.

The Most Important Properties Of Angelica Balsam

While adults like to use the nasal spray for swollen nasal mucous membranes, this is not easily possible for babies. In this respect, angelica balm products are highly recommended. They are extremely gentle and intensive at the same time.

Nevertheless, you should not use angelica balm on babies under three months of age. There are certainly exceptions to this rule. If in doubt, ask your trusted midwife. She may advise you to first test whether your baby with a cold reacts positively to the characteristic scent of angelica balsam or not.

Compared to other cold balms for grown-ups, which are usually applied directly to the skin, you should proceed differently with angelica balm for the baby. It is best to put a small blob of the balm on a soft cloth and drape this in the baby’s bed in the head area.

Also interesting:
Vaccinations - Yes, No? A-List Of The Most Important Diseases

It is important that the child cannot touch the cloth with his little hands. The positive effect of angelica balm: as soon as your baby perceives the fragrant vapors of the oils it contains, it will soon be able to breathe more freely and sleep more peacefully.

The Composition Of Angelica Balm

Angelica balm is a natural balm for colds, which is characterized by its very special composition. The essential oil of angelica root and other oils are implemented in the lipophilic base.

Thus, angelica balm has warming, relaxing and soothing effect at the same time. Also the respiratory relieving and expectorant as well as expectorant effect makes angelica balsam so valuable for the baby.

Due to its specific effect, angelica balsam is an ideal cold remedy that can help your baby very well with colds and coughs. While angelica balsam should only be used externally on babies younger than 12 weeks, it is different for bigger babies. When your child is six months old, direct skin contact with angelica balm is recommended.

Not only your caresses do the baby good, but especially the selected essences with their special effect.

If you are not quite sure whether Angelica Balm is good for your baby, you should test it on an invisible part of the skin to see if redness occurs. You can put a small dab of the balm on the wrist or ankle.

If there is no noticeable redness after about five to ten minutes, you can use the angelica balm without hesitation. Certainly, the skin of your little darling will redden very slightly after application. However, this is completely normal, since the angelica balm has a blood circulation-promoting effect.

With regard to the application of angelica balm in summer or on hot days, you should note the following: So-called furanocoumarins are contained in angelica oil. It is possible that they could cause allergic reactions when exposed to sun and UV radiation.

Therefore, before using angelica balm on your baby, you should check with your trusted doctor whether the product is suitable for your child. The main ingredient of the semi-solid balm – angelica oil – is an essential oil extracted from the rhizome (root) of Angelica archangelica or angelica.

Angelica root balm is designed exclusively for external use. It consists mainly of beeswax, lanolin, shea butter, almond and olive oil. In addition, other oils are included, such as marjoram and thyme oil.

Looking at the original composition of the balm according to Ingeborg Stadelmann, the following ingredients were included:

The essential oils in angelica balsam do not work right away, but after a few hours, you will see that your child’s cold symptoms have eased. This is how angelica balsam works for infants with a cold, among other things:

When babies and toddlers suffer from cold symptoms such as colds, coughs, sore throats and listlessness, angelica balsam is ideal. If your infant has a cold, but your baby is 3 months or younger, you should not use angelica balm on the baby.

Also interesting:
Spina Bifida: What The Malformation Means For You And Your Child

Who is Ingeborg Stadelmann?

In 1976 Ingeborg Stadelmann passed her midwifery exam. In the course of her work as an expert in obstetrics as well as homeopathy, she wrote the bestseller “The Midwife Consultation”. Today, this guide is one of the best-selling books for expectant and breastfeeding mothers.

An opponent of so-called evidence-based medicine, she has continually educated herself in the fields of homeopathy and aromatherapy. In the 1980s, her original IS aroma blends came on the market, with angelica balsam being one of the best-known natural preparations.

The effects of angelica have been known for many centuries. When an infant has a cold and cough, angelica balsam is ideal. Adults suffering from gastrointestinal problems are also well advised to use angelica balsam. The expectorant, antiseptic, and wound-healing effects are clearly in focus in this regard.

After consulting your pediatrician or midwife, you can treat your baby with the balm for colds with a clear conscience. The natural product has been known for many years for its special effectiveness.

However, make sure that your baby, if it is younger than three months, does not come into direct contact with the product. Allergic reactions or irritation of the respiratory tract could be the result.

However, if you apply the balm to a cloth and drape it at a distance, you can still do your child some good from a distance and alleviate the symptoms of a cold. Then your little darling will soon be able to fall asleep and stay asleep again, and mommy and daddy will also have the opportunity to rest at night.