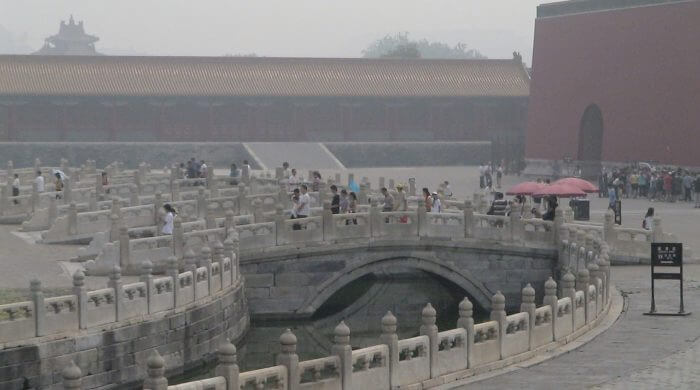 In the Chinese capital, Beijing schools are closed because of bad air. Very few cars are also allowed to drive.

All People, Including Children, Suffer From The Bad Air

In many cities of China, the air has been very bad for many years. People, especially children, suffer a lot from this air pollution. But now, especially in Beijing, the Smog is so strong that the highest alert level, the red level, has been declared. This smog is dangerous because it can make people sick. In Beijing, the smog is so strong that even when the sun is shining, you can’t see the sun anymore and you can only look a few meters away.

What Does The Red Alert Mean?

For the people in Beijing, the red alert means that their lives are severely restricted. For the next three days, all schools in the city will be closed. Even cars are only allowed to drive conditionally, and only half of all cars. Factories will also have to shut down production. This means that not as much may be produced as usual. So as an example, instead of 100 cars a day, only 40 cars may be built. This is the case with many factories. People are only supposed to stay in their homes as much as possible and not go out on the streets. Under no circumstances, however, should people go outdoors for sports.

China Itself Is To Blame For The Bad Air

In China, however, it is one’s own fault that the air is so bad. Unfortunately, many people and children now have to suffer because the government there does so little against air pollution. There are still many coal-fired power plants there, which simply blow all the exhaust gases unfiltered into the air. Now the people in the Chinese city are hoping that different weather will come soon. Supposedly there will be a lot of wind from Thursday and this could then blow the smog out of the city and bring fresh air into the city.

Beijing is the capital of China. The entire 16,807 square kilometers administrative area of Beijing has 20.69 million inhabitants. This area is thus larger than the entire state of Schleswig-Holstein here in Germany.

As Smog is the term used to describe a particularly harmful fog made up of exhaust gases. Smog is caused by car exhaust fumes and also by exhaust fumes from factories.

Also interesting:
The Federal Government Has Many Tasks