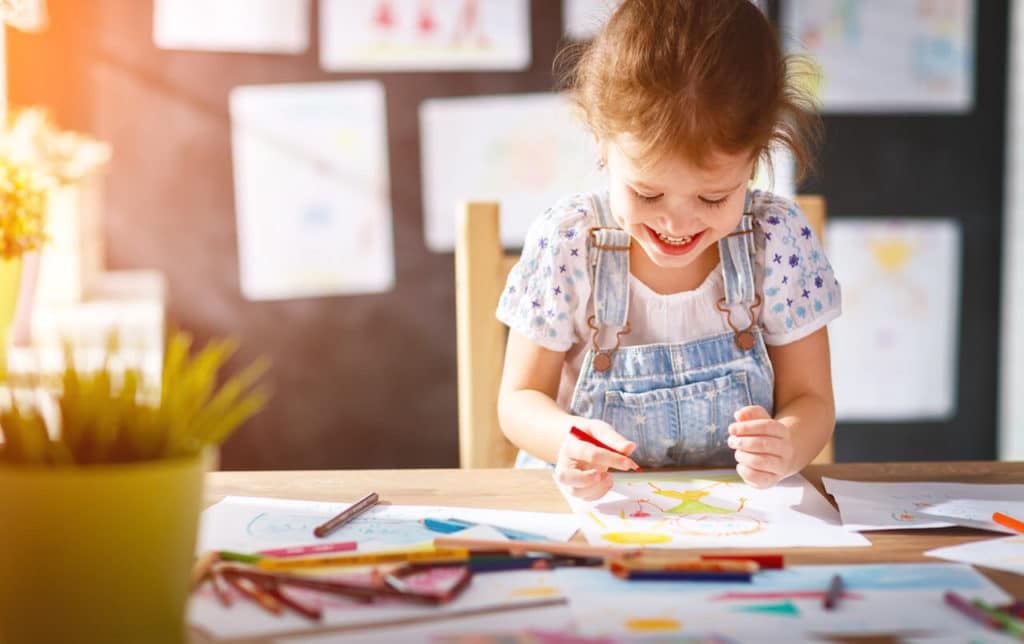 Concentration exercises promote concentration. This, in turn, is a subarea of attention. We focus our attention on a specific object.

Clearly, concentration is one of the most important exercises in later life. At the latest in school, a child whose concentration leaves something to be desired will have problems.

But is it even possible to practice something so complex? If your child just won’t or can’t concentrate, how can you get him or her to do so? Find out everything you need to know here.

Those who can concentrate better, learn better. On the other hand, those who can’t focus well suffer more easily from frustration later on, because failures at school are not long in coming.

A survey of teachers and elementary school students conducted by the DAK found that concentration problems among children and adolescents have been on the rise in recent years.

Studies On Concentration In Children

The good news first: You and your child can practice, as many studies show. There is influence in the negative sense as well as in the positive sense.

So if a study shows, for example, that too much television is bad for your child, it also means that you can help your child by limiting the amount of time he or she spends watching television each day.

There is even research that confirms this.

Of course, a playful approach is best suited to the child’s nature. But you can also extend your child’s concentration span with behavioral rules or nutrition.

Also interesting:
The Children's Room - This Is How To Avoid Pathogens

Did you know? Drink enough is part of good nutrition! Here you can find out what sufficient means for children.

All this does not only concern older children. Even babies are distracted by television. This is because their developing brain is strongly fixated on movement. So if the TV is constantly on at home, that’s not good.

In later years, there is a risk of poor concentration! Music, on the other hand, promotes children’s attention. All the more so if they take up an instrument or sing themselves.

Children who play sports in clubs or actively make music have been shown to do better in math and German.

Other media consumption should also be kept to a reasonable level. This applies to both children and parents. Another study found that children of constantly distracted parents are less able to concentrate.

This already starts at babyhood! So if you look at your smartphone every five minutes while walking with the stroller, you’re not doing your baby any favors.

Your baby may still be sleeping a lot, but he’s still developing. The phases in which he is awake can be used for playful concentration exercises. It’s very easy.

Look deeply into your child’s eyes and hold his gaze. Talk to him gently and get his attention. This will not only help your child get to know you better, but it will also be a fun way for him to complete his first concentration exercise.

Skeptics argue that it is not necessary to practice concentration exercises with children. After all, you can’t and don’t want to produce lots of little Einsteins.

The child learns everything it needs on its own, they say, because that is in its nature.

These people are not entirely wrong, because children do indeed learn very quickly. But in our world there are simply more distractions than in the days of our grandparents.

Concentration exercises create a counterbalance here, which helps the children with their orientation. This also prepares them optimally for school. Of course, you can also leave things to themselves.

But then your child may be giving away opportunities. In addition, your child may develop a lack of concentration, which will eventually have a negative effect.

There is a very simple method to arouse and maintain interest in children: Have them bake or cook alongside you. This way children learn how much effort is behind their favorite food.

And that you only get a good result if you strictly stick to it! The favorite meal is especially important. Because a fundamental part of a child’s attention is devoted exclusively to things that interest it.

Thus, many an apparent lack of concentration is just a lack of motivation!

Concentration Exercises: Everything Important At A Glance

Motivating Children: Nothing Easier Than That?

Motivation can come from within, in which case it is genuine interest. But you can also praise it frequently or show it the successes it has had so far. Then the motivation comes from the outside.

The inner motivation is of course the best, then it needs no encouragement from the outside. However, it will not work completely without external motivation, which becomes apparent at the latest at school.

To master here also unloved subjects, that does not work with lack of concentration! It goes without saying that praise is always better than reprimands or even monetary rewards.

For older children, the very idea of devoting time to their homework can be daunting: Learn here how to avoid the daily struggle!

Concentration Exercises Must Not Be Too Demanding!

However, many parents simply expect too much: children cannot concentrate well in the beginning. The older a child gets, the longer his attention span becomes.

Lack Of Concentration Or Not? This Is How Long Your Child Can Concentrate At A Stretch

One of the oldest remedies in the world still works great. Snuggled up together, read something aloud or look at a picture book: Here, an exciting story will completely capture your child’s attention!

The combination of concentration and movement is not a contradiction. Everything that challenges children’s motor skills also promotes them. This increases the brain power of the children.

Balancing promotes the sense of balance and coordination. In addition, the child incidentally learns to focus better on a task. Balance exercises are many and varied.

From holding a pencil with the tip resting on your finger to standing on one leg. Anything that is fun is allowed!

Put the thumb of one hand on the index finger of the same hand. Then tap all the other fingers in turn. And back again. Can your child do this? Can he or she do it with both hands at the same time?

It doesn’t have to be a little drummer: beating a bar inspires many small children and helps them to practice focused attention. In the process, they not only learn a sense of rhythm. Concentration also increases noticeably over a longer period of time.

This is also a classic and popular not only at parties. It is best played in a larger group. Place chairs in the middle according to the number of participants, but one too few.

Have music playing, an adult turns the music on and off. Every time the music goes off, everyone has to sit down. Whoever is left over is eliminated.

In addition to the basic skills, the child also learns to sit still here: Of course, this can also be learned as a dry exercise. But the best way is to combine it with playful elements.

Directions: The child should tell or draw what he or she notices on the way to school or daycare. Does he or she pass a supermarket?

Where does the cute little dog live whose garden fence you walk by with him? In general, painting is always a good remedy for lack of concentration.

Also interesting:
Childminder Or KITA - Which Is Better For My Child?

Tip: If your attention is flagging, pack something unusual, such as a hippo – and your concentration will return!

One of the most difficult exercises not only for children! The prerequisite is, of course, a secure knowledge of the alphabet.

Does Your Child Suffer From Lack Of Concentration?

This question answers itself if you take the above table as a guideline. However, it should be no more: Look at your child’s progress in a relaxed way. His development is always individual.

So don’t be afraid of ADHD – often the supposed backwardness gives itself in later years. Unfortunately, there is no universal definition of poor concentration. But you can do a lot to promote concentration in your child even without concentration exercises.

Increase Concentration: Create The Ideal Environment For The Child

Always promote your child’s concentration passively as well. This means creating the right environment in which a child is not distracted. This includes, for example, a quiet room without a running television.

The regularity of activity also trains his sense of attention. A well-ventilated room also helps the child to be able to devote himself to one thing for as long as possible. Older children need a desk, which should be neat and clean.

Conclusion: With Concentration Exercises You Support Your Child

Concentration exercises have been proven to increase a child’s ability to focus attention. You can already do a lot for your child from baby age.

Simple exercises such as intensive eye contact help your baby to concentrate on you and the world. The infant’s brain continues to develop rapidly. You determine to a large extent how this happens.

If you do not concentrate fully on your child during these precious first weeks, you hinder its development. Games are not always needed for concentration exercises, although they are of course appropriate for children.

But even just creating a quiet environment or limiting daily media consumption can do a lot of good for your child!