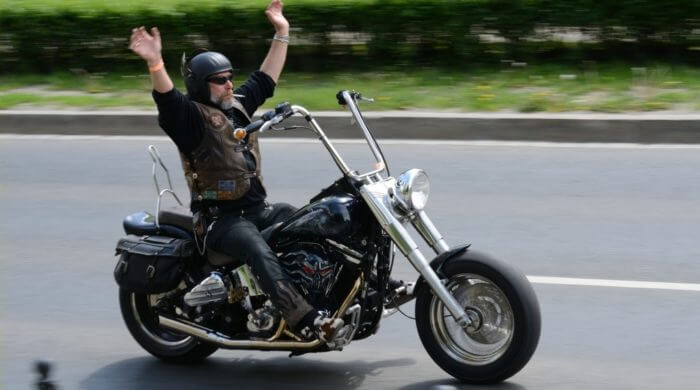 At the weekend there was in the federal state Rhineland-Palatinate a real crazy accident with a motorcycle. A motorcyclist had overestimated his speed and crashed into a car that was driving in front of him. The motorcyclist is thrown over his handlebars and flies through the rear window of the car in front of him. After the flight, however, he lands completely uninjured on the back seat of the car.

The accident occurred on the A 65 freeway between the towns of Neustadt and Ludwigshafen. A motorcyclist was traveling at high speed in the left lane and did not correctly estimate his own speed. In any case, he drove much too close to a car in front of him and slammed into it. On impact, the man was thrown from his motorcycle and slammed through the rear window of the car. He landed there on the back seat completely uninjured.

Man In The Car Continued To Drive

The motorcyclist was initially a little dazed, but otherwise, nothing had happened to him. The car driver had gotten a fright, but he also remained uninjured. When the motorcyclist asked the car driver to stop and let him out, the car driver did so. The driver of the motorcycle wanted to get back to his motorcycle and move it off the road. Although the windshield of the car was totally broken, the driver continued driving anyway. Why no one could say exactly and the police are now looking for this man, because he has high damage to his car. Maybe he was just glad that nothing else happened.

Ludwigshafen lies on the Rhine and is the second-largest city in the state of Rhineland-Palatinate after Mainz. Opposite on the other side of the Rhine is the city of Mannheim. More than 160,000 people live in Ludwigshafen.