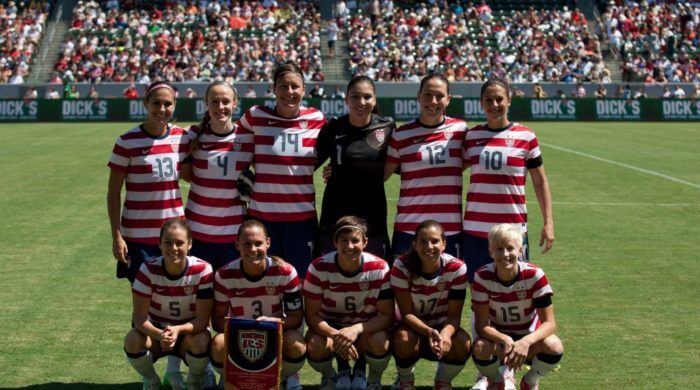 Disappointment everywhere in view of the performance of the German national women’s team at the Soccer World Cup in Canada. With two defeats in a row and a sobering 4th place, the players of national coach Silvia Neid go home. Without a chance, they lost against the USA in the Semifinals. Then, powerless and without a plan, they also lost the match for 3rd place against England. Fortunately, the women’s national team is about to undergo a radical change.

The Semifinal Against The USA

After the lucky victory against France in the quarterfinals, it was clear that they would have to go one better against the USA. But there was no sign of that from the start. The Germans were timid and ultimately had no chance against the strong Americans. Up to halftime, the score remained 0-0, but the 1-0 penalty kick by Carli Lloyd in the 69th minute was the logical consequence of the German national team’s lack of chances. The US girls then made the bag in the 84th minute by the goal of Kelley O`Hara to 2-0 and so the German ladies had to realize that the title will go to another team this year.

The Match For 3rd Place

After recovering from the defeat, the German women’s national team had to give everything again to at least get 3rd place at the World Cup. The German men had shown this often enough, that you can go home from a World Cup with a good feeling, but the German women’s national team showed that they have little desire and also that they lack the quality to achieve great titles at the moment. In the end, the team fought back and made it to overtime, but in the end, they lost the match for 3rd place against England 0-1 with a goal by Fara Williams in the 108th-minute Penalty. Besides Silvia Neid, goalkeeper Angerer will also end her career and that’s a good thing because the young players should now get a chance.

The final between the USA and Japan, on the other hand, was a real cracker and ended completely deservedly in favor of the USA, who were superior to the Japanese. After 90 minutes the score was 5-2 and the US girls celebrated until morning.

A world championship or Soccer World Cup is a tournament in which the best teams in the world compete for the title, first in groups, and then later in individual matches.

If there is a foul in the penalty area, one team gets a Penalty, i.e. a single shot, which is fired at the goal from a distance of 11 meters.