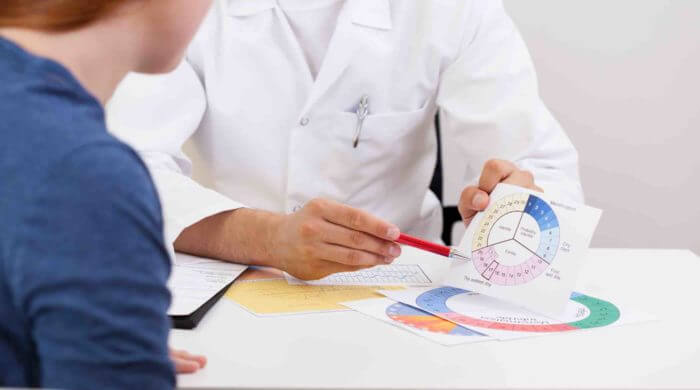 Periods during pregnancy – During pregnancy, your body goes through many changes. At the beginning, usually the hormonal balance gets a little confused, so the female body reacts to the pregnancy still a little rebellious and expresses this in symptoms such as vomiting, nausea and fatigue. After the first third of pregnancy, most expectant moms have gotten used to the new state and begin to enjoy their pregnancy.

Periods During Pregnancy: Rather Unlikely

As soon as a woman becomes pregnant, i.e. at the moment when her mature egg has been fertilized, a great many hormones are released in the female body. One of them is the corpus luteum hormone progesterone. This hormone is responsible for maintaining the pregnancy, producing enough endometrium for the embryo to implant after a few days, and also stops the production of other eggs.

Due to these physical functions, further pregnancy is prevented and the period in pregnancy is cancelled. On the other hand, women who take the pill for contraception can reduce its effect and become pregnant due to various reasons such as taking the pill irregularly, forgetting to take it, heavy alcohol consumption, gastrointestinal problems and others. If women do not notice that they are pregnant and continue to take the pill, they may have a hormonal period due to taking the pill. This is not a natural period in pregnancy.

Periods During Pregnancy: Reasons For Bleeding

Also interesting:
Toxoplasmosis In Pregnancy - What Does It Mean?

During this process, small blood vessels can be injured and bleeding can occur. Sometimes it is just a few droplets, but in some cases it can also be a typical bleeding that you also get during your period. Also, often the timing can fall on your cycle, so you may be a little surprised if it comes early or not even worry about it. Bleeding can also occur later in the pregnancy.

For example, if the mucus plug (also called drawing) comes loose at the end of pregnancy, vaginal bleeding may occur. This mucus plug covers the cervix and thus protects the uterus from germs with a mixture of mucus and blood. As soon as this plug is released, in most cases the birth will start soon.

Periods During Pregnancy: See A Gynecologist?

Bleeding during pregnancy does not always have to mean that the baby is unwell. Nevertheless, if bleeding occurs, you should always check for other symptoms. For example, premature birth may be indicated by vaginal bleeding.

Also interesting:
Pregnant After Miscarriage: What To Consider?

In addition, there is usually also severe pain or cramps. An ectopic pregnancy also occurs in most cases with bleeding. In this case, it usually still stings on one side of the abdomen. To be sure that your bleeding is not a cause for concern, you should visit your gynecologist.