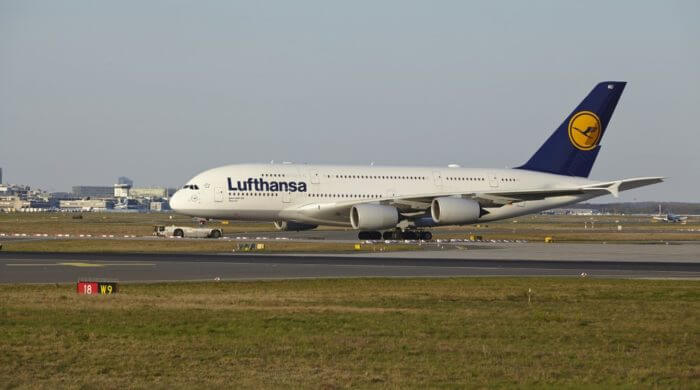 This week was Düsseldorf Airport was really busy. A lot of people had gathered on the visitors’ terrace. They all wanted to see the world’s largest passenger aircraft land there for the first time at around 1:30 p.m. on Wednesday.

Daily Landings Of The A 380

The largest passenger aircraft in the world, the so-called A 380 will now land and take off in Düsseldorf every day. From now on, there will be a daily connection with this giant aircraft between Düsseldorf and Dubai. In order for this giant aircraft to be able to take off and land at Düsseldorf Airport, the airport had to be prepared for it for two years and some reconstruction measures were necessary.

The A 380 has a wingspan of 80 meters. That is almost as long as a Fussbald field. But for this size, the taxiways, i.e. the access roads to the airport building where people get on and off the plane, and the path to the runway were not big enough at all. Therefore, the paths had to be widened and enlarged. In addition, something especially great was created here for the airplane passengers. Because the plane is so huge, people can board both the upper and lower floors of the giant planet at the same time. But because of the size and the many passengers that can fit, other important things were needed. New and much bigger fuel trucks had to be bought because this plane needs much more fuel than other planes. Also, the cars that deliver the food for the passengers had to be bought new so that more food can be brought to the plane.
If you live near the airport in Düsseldorf, you can always look up at the sky at noon when this plane is approaching. Of course, it would be even better if you felt like going to the airport with your parents and admiring the plane from the visitors’ terrace.

Also interesting:
German As A Foreign Language In Great Demand

The Dusseldorf Airport also called Düsseldorf Airport, is the third-largest airport in Germany. Every year, planes take off and land there with about 20 million people on board.

The A 380 is a four-engine wide-body aircraft built by the European aircraft manufacturer Airbus. It is the largest passenger aircraft in the world and there are two floors for passengers. In total, this aircraft can fit about 600 people, depending on the design.

Dubai is the largest city in the United Arab Emirates on the Persian Gulf and the capital of the Emirate of Dubai. Accordingly, almost the entire economic, social, cultural, and political life of the emirate takes place here and around 2.2 million people live here.

As Wingspan is the distance between the spread left and right wingtips. This can be the wings of a bird, but also the wings of an airplane.