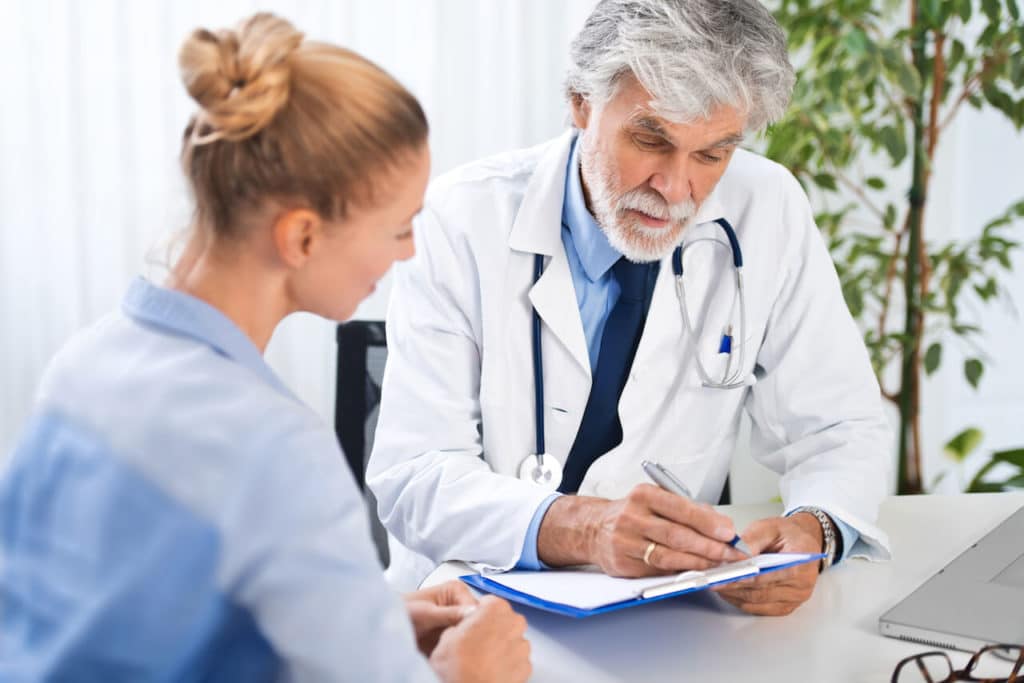 The influence of the thyroid gland on our metabolism and other body functions has long been underestimated. The organ is responsible for the production of important hormones which, among other things, can influence growth in childhood or be the cause of depression, obesity, etc.

Everything you need to know about hypothyroidism can be found here.

The thyroid gland, its Latin name is glandula thyreoidea, is located in the neck in front of the trachea below the larynx.

A narrow tissue bridge connects the two skin lobes to the left and right of the trachea. This gives it the shape of a butterfly.

What Does The Thyroid Gland Do?

The thyroid gland produces thyroid hormones, which are important for bodily functions, along with iodine and other substances. These influence all metabolic functions to the highest degree.

Whether it is the build-up or breakdown of fat deposits, the regulation of the heartbeat, the growth of children and adolescents, kidney and intestinal activity, brain activity, and much more – the hormones of the thyroid gland play a major role in all these physiological processes.

Formation And Action Of Hormones

Probably the best known thyroid hormones are triiodothyronine T3 and thyroxine T4. The majority of these two hormones are bound to proteins in the bloodstream, which serve as a means of transport to the individual organs.

The unbound T3 and T4 hormones influence metabolic processes. Another hormone of the gland is the so-called calcitonin. As the name suggests, this messenger substance influences calcium and bone metabolism.

How Does Hypothyroidism Develop?

If too much T3 and T4 hormones are produced, the pituitary gland reduces this production via a reduced TSH value. In contrast, it increases TSH levels when the thyroid gland needs to be stimulated to produce more hormones.

In turn, THS hormones are regulated by the higher-level hypothalamus (part of the diencephalon), which secretes the TRH (Thyrotropin Releasing Hormone) hormone and thus regulates all hormone production by the thyroid and pituitary glands.

Hypothyroidism is often accompanied by malfunction of multiple organs. This confuses both the doctor and the patient. In most cases, a nerve-racking examination marathon follows and the disease is either detected very late or not at all.

The last resort is then the psyche, which is the culprit for so many unrecognized diseases. If several of the symptoms listed below occur, the function of the thyroid gland should definitely be examined.

These 13 Symptoms Are Signs Of Hypothyroidism:

Decrease in pulse rate: pulse may drop to as low as 40 to 60 beats per minute.

Gastrointestinal tract problems:constipation is common, and high-fiber diets and high fluid intake do not help, nor does taking laxatives.

Constant freezing: The body no longer generates heat as it curbs energy and oxygen consumption. The body temperature is below 36.6° Celsius. Where others walk around barefoot and in a T-shirt, sufferers put on a thick sweater and socks.

Skin, hair, and nails: The skin feels dry, rough, and cool. It is scaly, itchy, and has a blue-gray color. The nails break and splinter easily. The hair is also brittle, dry, and dull.

The eyebrows fall outward in many patients, as do the eyelashes. There is also often a loss of skin pigmentation, which means that the skin becomes white patches, also known as vitiligo.

General slowing of the body’s functions: This results in fatigue and loss of performance, lack of concentration and even depression. The patient sleeps poorly and has the feeling of constant drowsiness during the day.

Tinnitus: Hypothyroidism can also trigger tinnitus. The affected person hears noises such as hissing, ringing, hissing. However, these are only subjectively perceived ear noises that a healthy person has no idea about.

Sleep apnea syndrome: If sleep deteriorates, night snoring accumulates, and there are even pauses in breathing during the night’s rest, then these may be hypothyroidism symptoms.

Breathing difficulties: Patients often complain of a feeling of tightness in the chest in association with hypothyroidism. Unfortunately, some doctors mistakenly confuse this symptom with bronchial asthma.

Menstrual and pregnancy problems: Periods stop. Irregular menstrual cycles occur. There is often a reduced likelihood of pregnancy because hypothyroidism suppresses ovulation. An increase in miscarriages and premature births are also possible hypothyroidism symptoms. Last but not least, it is also accompanied by a decreased libido. elternkompass.de

>Impaired iron absorption (iron deficiency): If the iron level in the blood is too low, it can absorb less oxygen, which in turn leads to fatigue and a drop in performance. In this case, too, simply taking iron supplements does not solve the cause, but at most provides temporary relief of symptoms.

Deteriorated kidney function: this symptom is often seen in elderly patients. As a result of this symptom, unsightly and sometimes painful edema forms in various parts of the body.

Symptoms In Children And Infants:

Delayed length growth: compared to their peers, children with hypothyroidism grow much more slowly and often do not grow as tall.

Generally slower development: A generally much slower cognitive development means that these children also have a very hard time in school. Their performance lags far behind that of their classmates.

In young children, typical hypothyroidism symptoms are problems with feeding, constipation, abdominal pain, noticeable crying behavior. They are usually very sleepy and there may be a Umbilical hernia show up.

What Diagnosis Can Unmask The Problem?

Before considering therapy, the butterfly-shaped organ and its surroundings are examined. There are several diagnostic procedures for this purpose:

Ultrasound: Ultrasound is a diagnostic imaging procedure that helps the doctor determine the size, location and shape of the thyroid gland. This enables him to detect malformations, cysts or other growths. However, it cannot be used to check thyroid function.

Scintigraphy: This is a nuclear medical form of diagnosis. It can be used to visualize the uptake and distribution of a low-level radioactive substance in the body.

It allows the physician to draw conclusions about thyroid function, as this procedure allows him to see how much and where the important trace element iodine is absorbed or stored.

Fine needle aspiration: Tiny pieces of tissue are removed from the thyroid gland through a thin hollow needle. Laboratory testing may provide information about possible cancer. Thyroid function is not determined by this procedure.

Hypothyroidism can be congenital or acquired during life.

Due to various thyroid defects, hypothyroidism can manifest after birth. The following defects can cause this:

Some causes of hypothyroidism develop during pregnancy but may return to normal after birth. These include the following possibilities:

There are numerous causes responsible for triggering hypothyroidism. It can manifest itself through:

Hashimoto’s Disease As The Most Common Cause Of Hypothyroidism:

At 80%, Hashimoto’s thyroiditis, named after its discoverer the Japanese physician Hakaru Hashimoto (1881-1934), is the most common cause of hypothyroidism.

The glandular tissue is gradually broken down and replaced by inactive connective tissue. This leads to decreased hormone production and eventually hypothyroidism.

These Forms Of Therapy Can Help

Iodine: Iodine deficiency often results in enlargement of the thyroid gland (goiter) and hypothyroidism. Administration of iodide tablets can counteract this phenomenon and the gland returns to normal.

In Hashimoto’s, however, no additional iodine should be administered outside of the diet.

I Thyroxine: This drug made from artificially produced sheath gland hormones is used to treat hypothyroidism regardless of its causes. I thyroxine is also used to treat iodine deficiency goiter, often in combination with iodide tablets.

This form of treatment is not always successful, which may entail surgery to remove the goiter. In turn, if too much thyroid tissue has been removed during surgery, administration of I thyroxine must compensate for the resulting decreased hormone-producing ability of the thyroid gland.

Antiphlogisitka: These anti-inflammatories are administered for acute inflammation and discomfort around the thyroid gland.

If hypothyroidism has manifested as a result of a tissue change, such as goiter, a benign or malignant tumor, there is often no other way out than surgery. The excess and diseased glandular tissue is removed and then drug treatment is usually prescribed.

An enlarged or tumor-affected thyroid gland can also be treated in the form of radioiodine therapy. This involves the administration of radioactive iodine in a tablet capsule, this is then absorbed by the thyroid cells which produce thyroid hormones.

Once the radioactive iodine has reached the thyroid cells, it emits beta rays there, causing cell death of the same. The thyroid tissue is destroyed, which makes it possible to treat various diseases.

Goiter is reduced in size, cancerous tissue dies off, etc. Who is predisposed to this type of treatment must be clarified by a medical professional.

The thyroid gland is a small organ that has been ignored for a long time. Yet it is a very sensitive organ whose optimal function depends on numerous factors. And even if this butterfly-shaped gland does its job well, complications with targeted organs can still occur.

So the first priority when various symptoms appear is not to treat them, but to discover the causes that lead to the ailments and then treat them in a targeted manner.