Home > Child > Kids news > Kids, Do You Know What Binge Eating Is? 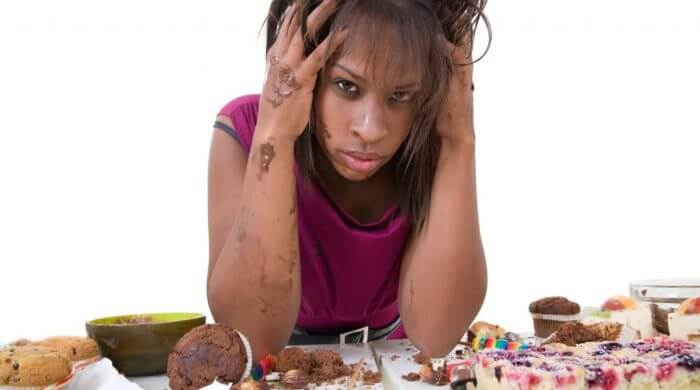 Many kids suffer from eating disorders. They develop unhealthy eating habits because they find themselves in difficult situations. Depending on the nature of the problems and the personality of the child, different eating disorders can develop. On our site, you can read about all types of eating disorders. Because besides the so-called binge-eating, there is also bulimia, anorexia, and obesity.

Eating As An Addiction

If you are addicted to food, then you have probably developed a binge eating disorder. Binge eating is an English term. It is made up of binge (gorge) and eating. It is therefore used to describe the behavior that occurs during so-called “frustration eating”. Those affected eat in order to experience a feeling of happiness.

Eating to soothe oneself and make oneself feel better can lead to an addiction. Addiction is associated with a constant craving for one thing. One then wants that thing constantly and over and over again. Even though the addiction has a negative impact on the person’s life and body, it is hard for them to break out of their pattern on their own. Most people need help to make a change in their lives.

As you may already know, you can become addicted to just about anything. So it’s not unlikely to become addicted to food when you’re not feeling well. Because food is relatively cheap and everyone has access to it, it’s pretty easy to slip into the trap of uncontrolled binge eating. Eating is accepted in our society. Eating too much is neither illegal nor does it immediately show damage to the body. That’s why many kids underestimate their binge eating.

There are precise diagnostic criteria according to which one can determine such a disorder or addiction. They look like this:

Eating binges that occur regularly (at least once a week) with the following characteristics:

Binge eating sometimes results in severe, physical damage. The body is not made to be fed such large amounts of food in such a short period of time. Therefore, the following complaints may occur:

In addition, those affected withdraw more and more from social life because they are ashamed of their disease and do not recognize it as such. In the worst case, this can even lead to depression and loss of a job or training position, or have a negative impact on school performance.

Differences From Other Eating Disorders

This eating addiction can be clearly distinguished from other eating disorders. This is because, unlike bulimia, there is no attempt to regurgitate what has been eaten.

In contrast to anorexia, people affected by binge eating also fear that they might be too fat. But this is not because their perception is disturbed (as is the case with anorexia). Rather, it has to do with the fact that you naturally get fatter when you have constant binge eating.

Binge eating occurs in spurts. Sufferers eat normal-sized portions when they are not having an eating episode. Most of the time, they don’t have bad eating habits. Their problem is much deeper and has to do with a sense of deep sadness or dissatisfaction. The affected ones want to fill an emptiness inside themselves by eating a lot. A bad day, a mean remark from a colleague, or the memory of a bad experience is enough to trigger an eating attack.

So just changing eating habits and exercising won’t help. Unlike obese people, binge eaters need to work deeply on themselves to make a lasting change.

Medical advice, of course, can only be given by a competent doctor. Therefore, a visit to the same is inevitable. This is also because he can prescribe psychotherapy. It is the most important station on the way to normality.

Apart from psychotherapy, however, you can also do a few things for yourself to avoid eating attacks. The following tips serve as a guide and are no substitute for therapy or medical consultation:

Lose Weight – Yes Or No?

Basically, the bigger problem with eating addicts is usually not the weight, but the psychological suffering. That is why it is more important to get distance from the topic of food. Thoughts should not constantly revolve around how one could lose weight or whether one is too fat. Severely overweight people should, of course, review their eating habits together with a nutritionist and exercise regularly.

Stress Is The Enemy

When you make progress in psychotherapy and feel stronger, you can take a closer look at the triggers for the eating attacks and face the problems head-on. However, there is no point in wanting everything at once. That’s why you should protect yourself from unpleasant situations in the first phase. The time to address the problem areas of life will come soon enough.

Make sure you feel good. If you’re not feeling well and you’re feeling vulnerable, treat yourself or do something good for yourself. Run a warm bath, relax with some music, or meditate.

Relaxation exercises and autogenic training can be valuable supporters in the fight against binge eating. After all, relaxation is the opposite of stress. When you feel relaxed and at ease, you usually have no reason to eat uncontrollably.

Engage in hobbies that distract you from your worries and feel good. You can also make a list of activities that trigger well-being in you. This could be a jog around the park, meeting your best friend, or snuggling with mom. Whenever you feel dissatisfaction, stick to this list and distract yourself with the activities you’ve set.

To get to the bottom of why you binge eat, you can write down your feelings before and after the attack. This will make it easier for you and your therapist to figure out the problems behind your eating disorder. Such templates for food diaries can be downloaded free of charge from the Internet.

2) What types of eating disorders are there? Write down which ones you know. Then talk about them with the person sitting next to you. Then compare your results.

3) How does a normal meal compare to an eating disorder? Draw a picture of a normal portion and a way-too-large portion of your favorite food. Think about how it would affect your body if you gobbled down the large portion in a short amount of time. Write down some thoughts about this.