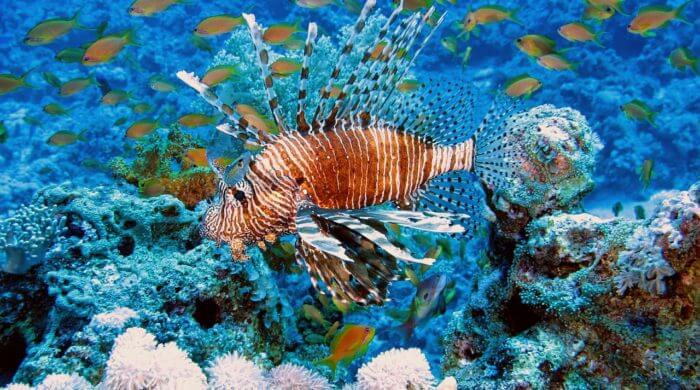 An Indian lionfish was discovered in the Mediterranean Sea. This is something special because it is actually not native there otherwise. The only problem is that this fish is dangerous.

Fish Reproduces In The Mediterranean Sea

This Indian lionfish was discovered by researchers from the USA. This was on the coast off the island of Cyprus, and it was also discovered that the fish reproduces there, that is, it reproduces. But this is a problem because there are always many vacationers there and the fish can become dangerous. It does not bite like a shark, but it has long poisonous spines. If people come into contact with these spines, they can even die from them.

Where Does The Lionfish Come From?

Until now, it was known that this fish is mainly found in large quantities in the Caribbean or on the east coast of the USA. There, it is even fought against because there are so many of them and because they are so dangerous. Researchers now believe that this fish is caused by the Suez Canal coming from the Red Sea and is looking for a new home in the Mediterranean. This is possible because climate change is warming the Mediterranean more and more, providing the fish with the best living conditions.

The Suez Canal is a shipping canal in Egypt between the port cities of Port Said and Port Taufiq near Suez, which connects the Mediterranean Sea with the Red Sea via the Isthmus of Suez.