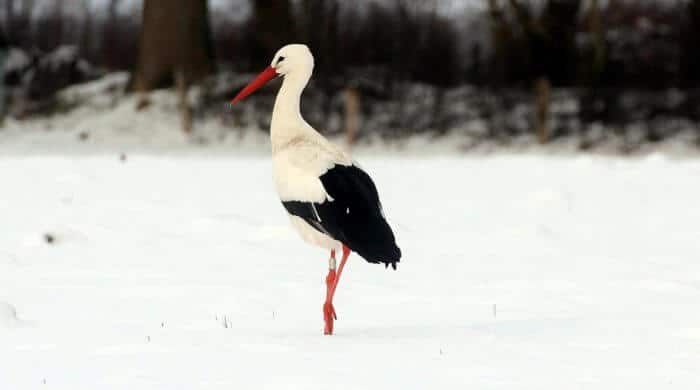 Normally storks are considered Migratory birds. This means that in winter they actually fly to where it is warmer. But more and more storks are now staying in Germany even in winter.

Just a few years ago, there were hardly any storks in Germany in winter. Most flew to the south, where it is much warmer than here with us. But this has changed in the meantime and more and more storks stay here in the country even in winter. This is because they now find plenty of food here and therefore do not have to make the long flight. In the past, the storks could be seen in large swarms in the sky when they set off on their flight to Spain or Africa in particular.

They Get Food From People

Today, very many storks prefer to stay here. There is enough food. Very often we humans make sure that the storks do not have to starve even in winter. Besides, winters are not as cold as they used to be and there is not so much snow in many parts of the country. A few years ago, things looked different. That’s why it’s easier for storks to find enough food for themselves during the cold season.

However, bird conservationists here in Germany do not see sufficient food as the main reason why storks no longer fly south to spend the winter. Rather, they suspect that certain breeding programs are to blame. About 40 to 50 years ago, the storks were simply locked up in winter, so that many could not fly away. The storks then accepted this and passed it on generation after generation. Rather, however, the truth lies in both the sufficient food and the behavior of the storks.

As Migratory birds are called, which fly away in winter and remain there until spring. Then they come back to Germany. About half of all birds in Germany are migratory. On their flight south, sometimes as far as Africa, some of them cover up to 1000 km a day.