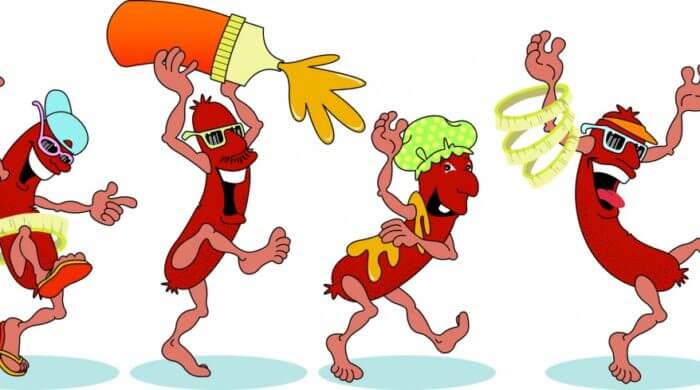 Every year on American Independence Day a hotdog contest takes place in New York. For the first time, the 23-year-old Matt Stonie from California won. He managed to eat 62 hot dogs in ten minutes Hotdogs in ten minutes.

The Winner For The First Time

Last year Matt Stonie managed 56 hotdogs and came second behind Joey Chestnut, who won eight times in a row. But this year Matt Stonie showed his best side and managed 62 hotdogs in ten minutes. Chestnut remained this with 60 Hotdogs only the second place. When you see the 23-year-old, you have to wonder where he stuffs all those hotdogs in such a short time, because he is a very slim and athletic young man. Series winner Joey Chestnut showed himself to be a fair loser but promised to attack again next year. At least he can be a little bit reassured because he still holds the world record in hotdog eating and that is 69 pieces. He set this world record at the eating contest in 2013.

The Women Also Have A New Winner

There was also a new winner in the women’s eating competition this year. The winner was 29-year-old Miki Sudo from Las Vegas. She managed 38 hotdogs in ten minutes and thus won clearly ahead of last year’s winner Sonya Thomas, who only managed 31 hotdogs this time. That was not a good performance by her, because after all, she is the world record holder with 45 hotdogs, which she had set in 2012.

For spectators, this hotdog eating competition is often a real mess, because there are no good eating manners here. The participants stuff one hotdog after another into themselves. To make them slide down better, they are also allowed to drink something in between and also dip the bun from the hotdog in water. But the spectators like it and this year again many people enthusiastically cheered the participants.

California is the third-largest state in the United States of America by area and by far the most populous. It is located in the west of the country and borders the Pacific Ocean, the states of Oregon, Nevada, and Arizona. California borders the neighboring country of Mexico.

Also interesting:
Every Child Should Have Citizenship

Hotdogs consist of a heated scalded sausage in an oblong, usually soft, wheat bun that is usually roasted or steamed. The hot dog bun is cut in half lengthwise and heated. The hot sausage is then placed inside and garnished with sauces such as ketchup, mustard, or mayonnaise. In the USA, the hot dog is usually cooked on a grill.