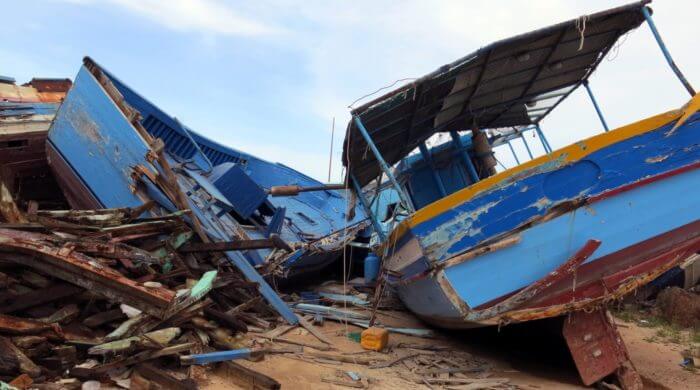 Unfortunately, many countries in the world are very poor. People there have no work and not enough to eat. Often there is also war in these countries, so people try to flee to other countries where life is safer for them and their children. People then become refugees, trying to flee to another country and live a better life there. Many refugees come from Africa and want to cross the Mediterranean Sea to Europe flee. This is a dangerous journey because often these people have only very old boats for the trip.

Especially the Mediterranean Sea is very popular with refugees, who try to get from Africa to Europe in a life-threatening journey in tiny little boats, hoping for a better life. Already more than once there have been accidents, the boats sank and many people drowned. Often the boats make it to Spain or Italy > where they are picked up by the police. Because it is so that the countries in Europe do not want to simply take all refugees, they can not just come here to us, say the politicians.

Also interesting:
IS Carries Out Several Suicide Attacks In Northern Iraq - One Bomber Is German

In the past week, a Tragedy occurred on the Mediterranean Sea. A boat from Libya sank and 400 people have been missing since. 144 refugees were rescued by the Italian marine police. The refugee boat with over 550 people on board had overturned, unfortunately, the police officers found so far only 144 people alive. 2 years ago, 360 people already drowned off the Italian island of Lampedusa in the Mediterranean Sea.

People who survive that perilous journey across the Mediterranean are housed in reception camps until governments decide whether or not to allow them to stay in Europe. However, these camps are very very full due to the civil war in Libya. Just in the last week, 8500 people have fled to Europe, with 1200 people arriving in Palermo, Italy, in one day alone. The helpers in the refugee camps are urgently looking for support.

Africa is a large continent with many poor countries.

Europe is also a continent. Germany is on this continent.

The Mediterranean Sea is between Europe and Africa.

Spain and Italy are countries that lie directly on the Mediterranean Sea.

A tragedy is a very bad thing.

Libya is a country where war has been going on for 10 years, it is in Africa.