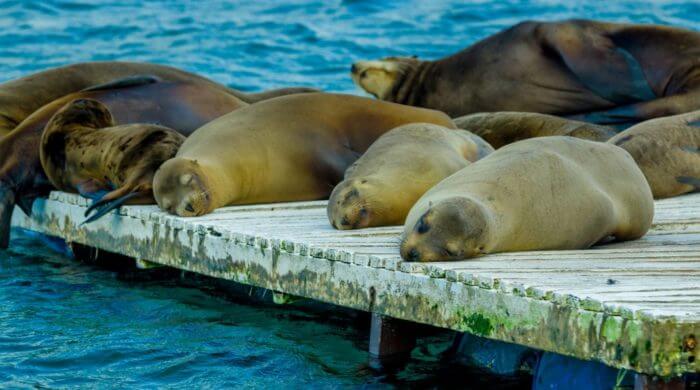 Climate Change also affects the wildlife on our planet. This is especially noticeable in California this spring when more baby sea lions are stranded off the coast than ever before. Animal conservationists are rushing to California beaches to pick up the baby sea lions and take them to rescue centers. They have already rescued more than 1500 sea lions. It is noticeable that the sea lion pups are very emaciated. In the rescue stations, they first get enough food, but at some point, the animal welfare workers have to release them back into the wild.

Sea Lions Are Independent At An Early Age

A baby sea lion is born in the summer and is then cared for by the mother sea lion for six months. Sea lions are Mammals and they feed their offspring with milk from their bodies just as humans do. Because baby sea lions are very hungry, the parents have to search for food in the sea to keep the mother’s strength up. Adult sea lions eat mainly fish. The babies accompany the mother in her search for food. Animal conservationists believe that the babies stranded off the California coast became too far from their mothers and were unable to find them.

Also interesting:
More And More Children And Teenagers Are Addicted To The Internet

Because there are more and more cars in the world and more and more airplanes are flying, the climate has changed a lot in the last 150 years. Again and again, there are unusual natural phenomena. El Niño is one such Phenomenon El Niño is one such phenomenon, which is caused by warm water masses flowing across the Pacific toward South America. Since the 1950s, this phenomenon has become stronger, and as a result, intensified Droughts and flooding along the coasts. The warmer water causes fish to swim farther and farther north. They love and need cooler water to survive. The sea lion mamas follow these fish as they forage for food and the babies do not follow.

The baby sea lions are fed concentrated feeds at stations along the California coast. They get vitamins, pureed herring, and milk. Then the animal welfare workers show them how to hunt for their own food. To do this, the animal welfare workers built a large pool at the mammal center in California. After the young sea lions regain their strength, which is about 4-6 weeks, they are allowed back out into the ocean.

Also interesting:
How Safe Is Skype For Kids?

Climate change refers to the change in weather.
California is a state and is located in the United States of America (USA).
Mammals are animals that feed their babies with milk from their breasts.
Phenomena are unusual things that are difficult to explain.
Droughts occur when there is little or no rain in a place for a long time. Then no more food grows there either.