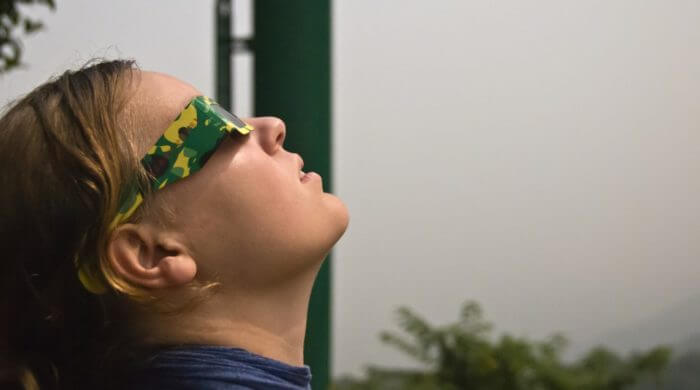 On Friday morning we can observe in the sky a natural phenomenon that we do not get to see very often: A solar eclipse. This means that the moon moves in front of the sun in the sky and makes everything darker. Total solar eclipses, where the moon moves completely over the sun and it gets really dark during the day, are very, very rare. This Friday we will experience one partial solar eclipse, which means we can still partially see the sun.

Do Not Look Into The Sun

Anyone observing a solar eclipse needs 2 things. Good weather with a clear sky and eclipse glasses, which you can easily build yourself. Because looking directly into the sun will damage your eyes. The eclipse will take place exactly during school hours, between 9 and 11 o’clock. You might ask your teachers to go out with you and watch the event. Maybe your school also has a Telescope You can use it to look at the sun as the moon moves partially overhead. As the moon slowly moves in front of the sun, the sun becomes smaller and smaller. The sun then appears black and looks completely different than usual.

Also interesting:
The Most Common Contraceptive Mistakes And How You Can Prevent Them

How Does It Come To The Solar Eclipse

A solar eclipse can only occur when New moon because then the moon stands between the earth and the sun and moves completely or only a piece over the sun disk. Since the sun now illuminates the moon from behind, a shadow falls on the earth, the moon shadow. We rarely experience this natural spectacle, because the moon has a slightly tilted orbit on which it wanders around the earth. This causes it to mostly pass below or above the sun. However, if the moon and the sun meet in their orbits, a solar eclipse occurs. For this to happen, the moon, sun, and earth must be exactly in line.

In a partial solar eclipse, only part of the sun is covered by the moon.
The new moon is the name of the moon when it is not visible in the night sky or only as a narrow crescent.
Telescopes are long tubes through which you can observe the sky and the stars.