Home > Baby > Baby health > Spina Bifida: What The Malformation Means For You And Your Child 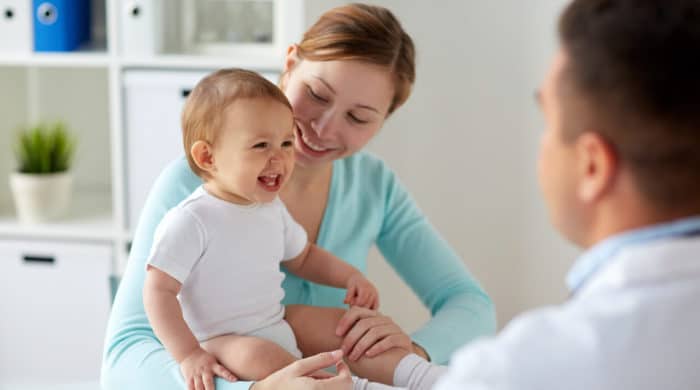 Many people have probably heard the term “spina bifida” or rather “open back”. But only a few can really imagine what it means. So when you find out that your unborn or newborn baby has spina bifida, you may be at a loss at first, feeling overwhelmed and asking yourself: What does this mean for my child? Spina bifida is a malformation of the spine and often of the spinal cord. It develops during pregnancy and requires regular, individualized treatment throughout life. The causes of an open back are not yet sufficiently understood, but certain factors can increase the risk of spina bifida.

Thanks to early detection procedures, as well as surgery in infancy if necessary, children with spina bifida can develop much better today than in the past – both physically and mentally.

Open Or Closed: What Forms Of Spina Bifida Are There?

Also interesting:
Causes And Treatment - These Are Common Skin Diseases In Babies

Causes: How And Why Does An Open Back Develop?

The exact cause of why spina bifida occurs is not yet sufficiently understood. What is certain is that the spine of the embryo forms very early: Already during the 3rd to 4th week of pregnancy, the preliminary stage of the vertebral canal – the so-called neural ear – closes and then continues to develop into the spinal column with spinal cord. In a few cases, however, the neural ear tears or does not close completely. As a result, one or more vertebral arches remain open and the spinal cord membranes may protrude. Researchers suspect that both genetic and external influences may be responsible for this defect in the back. In addition, a deficiency of folic acid (vitamin B9) and the use of certain medications, such as those for epilepsy, are considered risk factors.

Symptoms: What Are The Consequences Of An Open Back?

While there are usually no symptoms at all in spina bifida occulta, the effects of spina bifida aperta vary greatly from patient to patient. They often begin in early childhood, but in some people the symptoms do not appear until adulthood. When nerve tissue is affected by spina bifida, certain parts of the body lack sensitivity to pain or touch, and paralysis is often the result. These are particularly severe when the cleft is located high up. In about 80 percent of patients, however, the lower part of the back is affected. Typical symptoms of spina bifida include deformities of the ankles, hips and knees. About half of all children develop scoliosis (spinal curvature) as a result of the deformity. Impairments of bladder and bowel function are also not uncommon. Depending on the severity of the symptoms, the mobility and independence of those affected are restricted to a greater or lesser extent. It is possible that the deformity of the back will have little effect on your child’s daily life, but it is also possible that he or she will face a life in a wheelchair.

Also interesting:
Your Baby Is Short? These Are The Causes

The Diagnosis: How And When Is Spina Bifida Detected?

Thanks to modern medical procedures, doctors can often diagnose spina bifida during pregnancy. If certain abnormalities are detected during an ultrasound examination, an amniocentesis can confirm the suspicion. A blood test, the so-called triple test, also provides clues. For this, the doctor will take blood samples in the 16th week of pregnancy, which will then be examined in the laboratory. In about 80 percent of cases, an open back can be diagnosed before birth.

X-ray And MRI After Birth

However, the actual extent of the open back cannot be clearly determined by prenatal diagnostics. They can be easily determined after birth. In addition to an X-ray examination, magnetic resonance imaging (MRI) is used for this purpose. Further neurological, orthopedic and ophthalmological examinations are also usually performed on the newborn.

Therapy: How Is Spina Bifida Treated?

An open back can be treated, but not cured. Therefore, a therapy that is individually tailored to your child is necessary throughout his or her life. The basic goal is to enable the child to live as independently as possible from the beginning. This makes it easier for him or her to integrate into kindergarten, school and later into professional life. To achieve this, several doctors from different specialties usually work together. The first treatment step takes place just a few days after birth: the doctor closes the back so that germs cannot penetrate and cause further nerve damage. To do this, he usually removes a piece of skin from another part of the body. In many cases, further corrective surgery is performed over time, especially in the hip area and on the knees and feet.

Also interesting:
Your Baby Has A Fever When Teething? This Is What You Should Do Now

In addition to surgical methods, there are various conservative approaches, first and foremost physiotherapy. It begins shortly after birth. Various orthopedic aids are also used for patients with spina bifida. For example, splints and corsets, walking apparatuses or special orthopedic shoes make it easier for children to stand and walk. If the bladder is paralyzed, a catheter ensures regular emptying. If the function of the intestinal muscles is impaired, various aids are also available. These include colonic irrigation, massages and suppositories. In general, a high-fiber diet is recommended for children with these symptoms. This will keep the stool consistency softer.

Prevention: Can An Open Back Be Prevented?

As long as there is no known cause for the development of spina bifida, it unfortunately cannot be prevented from the outset. However, it is scientifically proven that the risk of spina bifida is significantly reduced by taking folic acid. Therefore, doctors advise taking folic acid supplements during the first 12 weeks of pregnancy. A daily dose of 0.4 milligrams is recommended. Ideally, you should take the preparations four weeks before you plan to conceive. It is best to contact your gynecologist early on and ask for advice.

If you already have a child with a spina or if the malformation of the back occurs more frequently in your family, higher dosages apply. In this case, 4 milligrams of folic acid per day are advisable. In addition, you should eat a diet rich in folic acid during pregnancy. There is a lot of vitamin B9 in leafy vegetables such as spinach or lettuce, in wholemeal flour, potatoes and tomatoes, as well as in beef liver, tomatoes and some types of fruit. If your child was clearly diagnosed with an open back after birth, it is important that you take him or her to the pediatrician for regular check-ups. This way, deformities, malpositions and delays in growth can be detected early and treated accordingly.