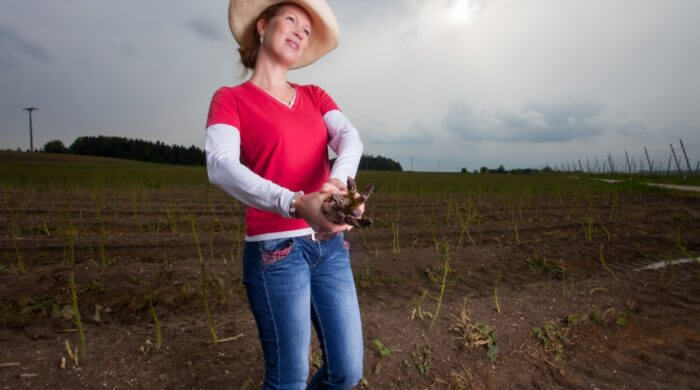 In many areas in Germany, the Asparagus harvest is taking place. This “white gold”, as asparagus is called by the asparagus farmers, has just harvest time and can look back on a long history.

Asparagus comes in three different varieties and colors: White, green, and purple. The white asparagus is particularly popular, from which the asparagus also has the name “white gold”. It stays so bright because it grows underground in long, mounded hills. Since it is not exposed to sunlight, this variety of asparagus is white. Harvesting is strenuous and great care must be taken not to damage the white spears as they are pulled from the ground. Asparagus pricking is the name of the harvesting method, and every year many people from Poland, Estonia, the Czech Republic, and other countries come to Germany to help with the asparagus harvest. The workers have a special asparagus knife, with which they pierce the soil and cut directly above the root, the long rod of asparagus.

Also interesting:
The School Subject "Everyday Life" Is To Be Newly Introduced

Asparagus is considered a Delicacy because the cultivation and harvesting are so laborious. Accordingly, asparagus is also very expensive. In earlier times, only particularly rich people could buy the asparagus, such as kings, nobles, and rich merchants. And even today asparagus is eaten only on special occasions, usually with a Hollandaise sauce (pronounced: “holondäse”) and ham, in which the asparagus is rolled.

Where Does The Asparagus Come From ?

The asparagus has its origin in Asia but already the Greeks and the Romans knew this vegetable as a medicinal plant. In 304 A.D. asparagus became so expensive in Rome that the emperor passed a law that set a price for the asparagus. In Greece, asparagus was considered a sacred plant to the Goddess Aphrodite consecrated. In the Middle Ages, asparagus was cultivated on a large scale in Europe. Above all Monks cultivated it for its healing properties.

Asparagus harvest: The harvest of asparagus begins in mid-April in Germany.

Also interesting:
We Go On Vacation

Sauce Hollandaise is a white sauce with a lot of butter and lemon, which is eaten with asparagus.

Asia is the continent on which China and India are located.

Aphrodite is the Greek goddess of love and beauty.

Monks are men who live in a monastery.