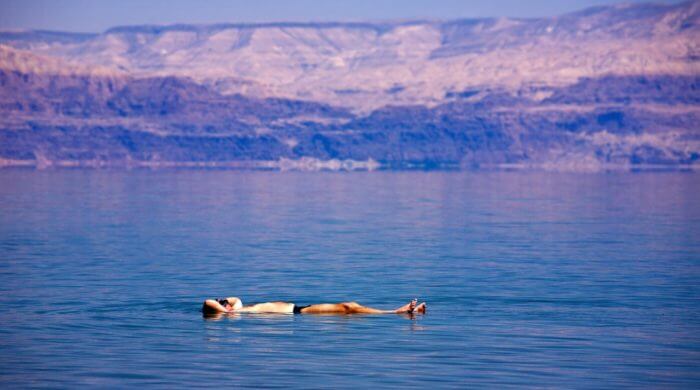 The Dead Sea: Actually A Lake

Strictly speaking, the Dead Sea is not a sea at all, but a lake. This large lake is situated between Jordan, Israel and the West Bank. The salt content of the Dead Sea is between 28 and 33 percent – for comparison: the salt content of the Mediterranean is only 3.8 percent. This results in funny circumstances: For example, you can hardly sink in the Dead Sea. If you float on the surface of the water, you can read a newspaper on the surface without any swimming motion and you won’t sink. Also, the high salt content in the Dead Sea has a healing effect. Especially people suffering from skin or lung diseases use the salty air for recreation.

The Dead Sea Is Shrinking

It has been known for years that the Dead Sea is getting smaller and smaller. It is actually shrinking in the truest sense of the word. Now the dramatic extent to which the salt lake is disappearing is known: Every year, the water level of the Dead Sea drops by 70 centimeters. In the past 30 years, the lake has sunk by 21 meters. This has severe consequences for the surrounding area: bridges, houses, and roads near the Dead Sea are at risk of collapse. The Dead Sea is probably shrinking so quickly mainly because so much water is being taken from the tributaries. If the subsidence continues at this rate, the Dead Sea will have disappeared completely in 300 years.

The West Bank is a territory occupied by Israel on which the Palestinians live. Palestine is not a state, but the people live there as if in their own country, with their own government, etc., but Israel also lays claim to the territory.

Also interesting:
Who Actually Brings The Presents At Christmas?

The Mediterranean Sea is a sea that lies between Italy, Greece, and North Africa.