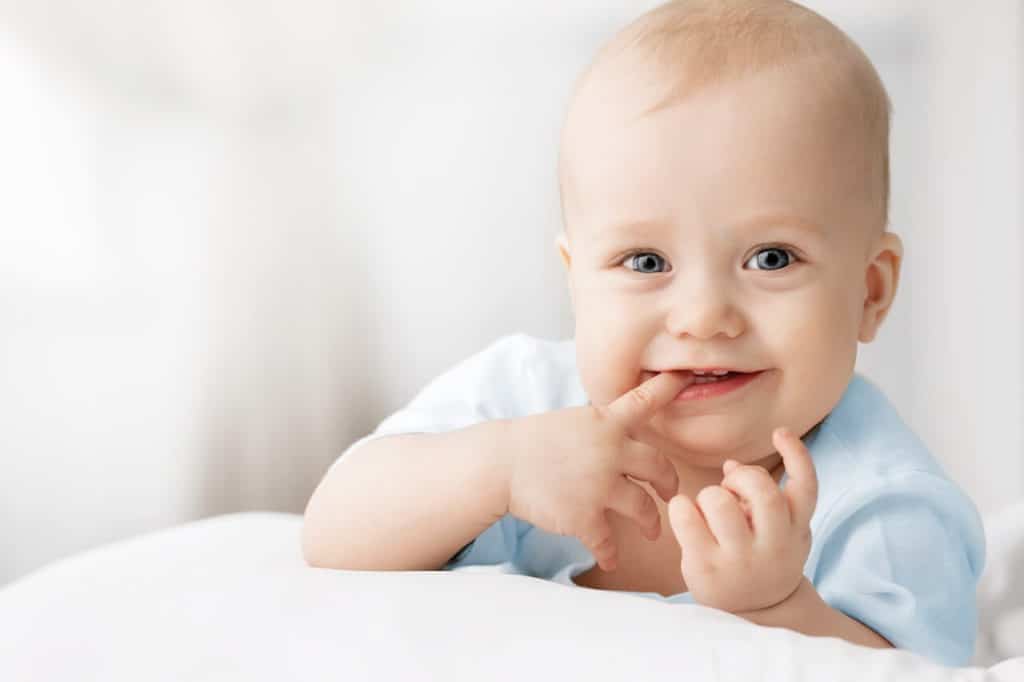 Recently, your baby’s cheeks were smooth and rosy; for a few days now, they have been dotted with red spots. The skin over them still feels soft, but the individual spots are gradually becoming denser and more and more bulging.

Your midwife says it’s a harmless hemangioma, but you have your doubts and want to know more. The Parents’ Compass knows your problem and provides you with answers to the most frequently asked questions on this topic:

The raised, discolored areas owe their guileless-looking nickname to their sponge-like appearance.

The size of the marks varies from a few millimeters to several centimeters; the color varies from light to scarlet red and in individual cases can also have bluish-violet nuances.

Due to this range of size and appearance, hemangiomas appear differently on each person.

Sometimes they appear as charming dots, sometimes as charismatic spots; but often they are puffy formations of alarming hue.

It is in this condition that hemangiomas best explain their popular name – for indeed they resemble a blood-filled sponge.

Because they sometimes appear as if from nowhere, the thought of skin diseases or injuries suggests itself. But a blood sponge is not caused by germs or mechanical action – it is an unpredictable freak of nature.

How Do Hemangiomas Develop?

The origin lies in prenatal times. As an embryo, your baby has formed endothelium, among many other important things.

With this cell layer, it controls numerous physiological processes and uses it as the “inner lining” of its blood vessels.

However, for some as yet unexplained reason, more endothelium than necessary is produced. Initially, the “excess” has no effect and does not present any of the usual skin diseases; however, for another unknown reason, the excess cell tissue penetrates to the outside in some places and forms a blood blister.

Theoretically, this can happen anywhere – both inside the body and on the skin surface. Most hemangiomas show up on the head, neck and face.

Scientists cannot answer why this is so. There is no logical explanation for the accumulation in certain parts of the body.

Among doctors, the raised, heavily discolored area is considered benign, because a hemangioma separates itself from the surrounding tissue and does not cause any direct damage. Therefore, hemangiomas usually do not need to be treated.

Sometimes, however, they are so large or are located in such an unfavorable manner that they.

In such cases, an individually tailored therapy is required.

For this purpose, the physician examines the hematoma. He distinguishes between two types – the localized and the segmental variety. Each of them has its own characteristics or sources of danger and requires a different approach:

In this form, hemangiomas occur most frequently. When the baby is born, they are not yet visible. Only a few days or weeks after birth do localized hemangiomas grow as red dots above the skin level of the other areas.

In the following 6-12 months, they enlarge continuously; after that, growth stagnates. The resulting hemangioma will remain with your little one until elementary school age.

Between the ages of 7 and 10, it gradually regresses. The blood blister dissolves into individual red dots, then appears only as a reddening of the skin, and finally disappears altogether.

Also interesting:
What You Absolutely Need To Know About Your Baby's Milk Teeth

If localized hemangiomas are located on the face, you can have them treated as “cosmetic emergencies”. However, much more important than aesthetics is whether it affects sensory perceptions or organs.

Thus, a hematoma can lead to these consequences:

If localized hemangiomas are located on the trunk or the extremities, they rarely cause any restrictions, so that you can relax and wait for them to develop or regress.

Here, localized hemangiomas can quickly develop into ulcers, which:

In this variant, hemangiomas are less common but very noticeable. They are almost always located on

Immediately after birth, a segmental hemangioma appears as a slight redness. Soon after, however, it begins to grow and soon covers a larger part of the face.

Depending on where it is located, such a hemangioma can interfere with feeding and/or breathing.

To minimize your baby’s physical and emotional suffering, you should get a segmental hemangioma treated as soon as possible.

How Are Hemangiomas Treated?

To determine what type of hemangioma your baby is showing, the doctor only needs to look at the little one. To make sure, he uses ultrasound and color Doppler techniques.

They provide information about how far the hemangioma protrudes into the tissue and whether it is active in any way – for example, whether it is pressing on internal organs or interfering with a bodily function.

Also interesting:
Constipation In The Baby: What To Do?

The primary goal of therapy is to prevent the hemangioma from growing further and to minimize any side effects. Complete removal of the hemangioma is secondary, as it usually recedes on its own.

Which of the measures presented here will be applied to your baby will be determined by the doctor based on his experience as well as the depth extension and location of the hemangioma:

Within the framework of the so-called cryotherapy, the doctor uses electrically operated devices that generate temperatures of 30-40°C below zero. They act down to tissue depths of three millimeters and literally put the hemangioma on ice.

Liquid nitrogen of minus 196 degrees does the same. At such a temperature, the risk of damaging surrounding tissue is very high – which is why the doctor needs a lot of experience and steady hands for this measure.

Which laser the doctor uses for this form of treatment depends on how deep the hemangioma protrudes into the tissue: In areas of up to two millimeters, he uses a pulsed color laser; for deeper-lying hemangiomas, an ND laser is used.

The doctor will explain the details of the therapy to you immediately before treating your baby.

Segmental hemangiomas are additionally treated with cortisone. However, because of its numerous side effects, this drug has long been considered a critical measure. You should openly discuss this with the doctor and ask for possible alternatives to the use of cortisone.

One of these is propranolol – a blood pressure-lowering drug normally used for cardiovascular disease.

After French researchers observed a side effect on hemangiomas, they had their suspicions confirmed by clinical trials. Since then, propranolol has increasingly replaced the previously used cortisone in hemangioma therapy.

Also interesting:
Baby Teething: What You Should Know About It

Surgical intervention is mainly considered if the hemangioma impairs bodily functions or could endanger the mental well-being of your baby. Another reason for reaching for the scalpel is that the hemangioma is located on the hairy scalp.

By surgically removing it, the doctor prevents bald patches from developing later, which can be very distressing for adults.

How Do I Deal With An Untreated Hemangioma?

Many aging children develop quite an affectionate relationship with their hemangioma. They see it as a part of themselves and take much less offense to it than those around them.

You can learn a lot from this because in principle a hemangioma has no effect on physical well-being. It does not reduce the ability to perform or to learn, and it certainly does not affect the intelligence of your child.

Much more problems than the visible hemangiomas are caused by the hidden ones – especially if they are located in highly stressed areas.

Hemangiomas are exposed to increased stress in the diaper area, at waist level, or in the crooks of the arms and legs, because this is where excretory and grooming products or clothing and movement patterns affect the hemangioma.

When caring for your baby, be careful not to rub or squeeze the hemangioma. Clothing should not rub or pinch either, and sunscreen is essential for infants or toddlers anyway.

If the location of the hematoma is very disturbing, you have good reasons to have it removed. When planning an operation, however, you should always be guided by what is best for your little one – and never by what others think of the hemangioma.

2 thoughts on “The Hemangioma – A Striking Unique Feature”