Home > Toddler > Development and promotion of the toddler > The Parent-Child Relationship: Bonding, Trust And Support 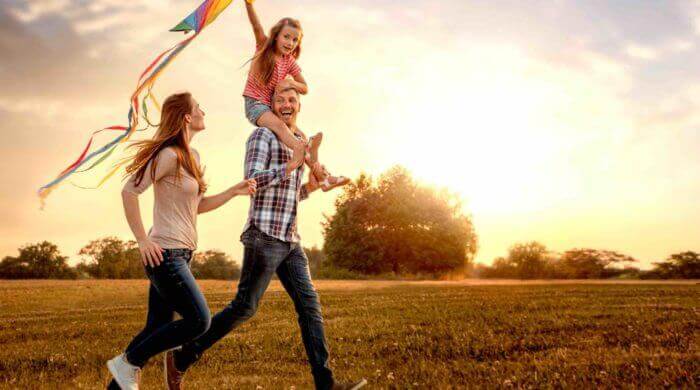 Facets Of The Parent-Child Relationship

The emotional climate in which a child grows up has a great influence on its personal development. Especially in the first years of life, it is the way people interact in the family that can form the foundation for a good parent-child relationship.

At the same time, from a purely physical point of view, the child is dependent on its parents. It must be provided with everything it needs. Over time, it will learn to become more independent and self-reliant.

In a loving environment, the child learns to talk with family members about what he has experienced, his hopes, wishes and fears. There is mutual respect, while affection and recognition are lived openly at the same time.

Depending on how well the child learns to express emotions due to his family environment, he will later be able to behave appropriately in the rest of life. If, for its part, it has received sufficient attention and learned to listen to its fellow human beings, it brings with it good prerequisites for ideal development. The mutual exchange of feelings is not innate. Like many other things, we have to learn it first. Accordingly, there are great differences between the development of schoolchildren due to different social circumstances.

We cannot catch up on many of our social skills if we did not have the opportunity to acquire them in childhood. Examples include the ability to show one’s own feelings and the acquisition of social skills.

The newborn is dependent on the affection of its parents. Not only because it needs it later to develop socially. It is also purely physically dependent on being paid attention to. The baby can only survive if the adults satisfy its needs, such as food, stimulation, warmth and hydration, and constantly (intuitively) check its state of health.

Development Of The Parent-Child Relationship

Already during pregnancy, the child develops a relationship with the mother and her environment. In this way, it becomes accustomed to the voice of its parents and siblings, who will later accompany it through life.

Dependent And The Infant

In infancy, the child is not yet fully aware of its environment. His motor skills are still clumsy. Important channels of perception such as vision and hearing have yet to be fully developed. Nevertheless, during this time there is already a close relationship between parents and child or, in particular, between mother and child.

It is a phase of feeling in which the infant finds himself. He is sleepily content or awake and curious. It can be assumed that the childd does not yet distinguish between himself and other persons or things. His “I” is not yet developed or does not yet exist. In order to develop this part, namely the psyche, it needs closeness to its parents and, in turn, the satisfaction of its other basic needs. One speaks here also of the support function of the environment of the infant.

Also interesting:
Why Children's Magazines Are Important For Your Child

This support function means nothing other than that the still very small human being is dependent on being cared for by adults. Because the parents, for their part, devote a great deal of time, attention and, not least, nervous strength to doing justice to the child, an intensive parent-child bond develops, even though the child can still hardly express or communicate itself except for occasional crying or (usually involuntary) laughter. The infant triggers certain innate behavior patterns in its parents. They are caring, handle the child gently, and often intuitively know what to do based on the child’s facial expressions and the tone of the cry.

The early, first phase of the infant’s life essentially determines how well his personality will be able to develop later.

If the infant’s trust in his environment (“basic trust”) is not sufficiently strengthened, he will inevitably suffer the consequences in adult life. In stressful situations, he may even lose touch with himself and his environment. This can cause panic and, in the worst case, lead to an anxiety disorder (cf. Rudolf 1996).

The toddler (third to sixth year of life) has already developed all essential physical functions. Nevertheless, many things happen: the child grows, gains strength and becomes more and more dexterouskter. He has already gained control over his motor skills and, by the time he reaches school age, he can sit still if necessary. This control over their own motor skills is a prerequisite for reaching school readiness.

Unlike the infant, the toddler already knows that he is different from the rest of his environment. He sees himself as an independent person and is able to engage mentally with the outside world. Thus, for the first time, topics such as love, sexuality and death enter the child’s consciousness. At the same time, the child acquires its sexual identity, which makes it aware that it is different from the opposite sex.

Also interesting:
Overconfidence Can Be Dangerous When Swimming

Children in infancy are not infrequently afraid of what is yet to come. Their previously very playful life gains depth, which can be enormously unsettling.

Now the child determines its own relationships with others. It has an identity and thus its own intentions. It understands its role in the family unit and orients itself to the same-sex parent. It cherishes the wish to become such a trophy wife like its mother or a trophy boy like its father someday. Accordingly, it tries to learn as much as possible from its parents. The child holds its parents in very high esteem and has a correspondingly close bond with them.

The elementary school child is no longer educated only by his parents and family members. Now it is the teacher who takes over a large part of the upbringing. Thus, a new caregiver enters the child’s life.

During the lessons at school, the child has to cope without the family support. He learns how it feels to be on his own sometimes. Now it has to perform on its own. Many parents measure their educational success by their child’s grades. This brings with it a certain expectation of the child’s academic performance. If the child brings home good grades, they are satisfied. If the child has an unsatisfactory performance, he or she feels the dissatisfaction of his or her parents. Not infrequently, the result for the child is that conforming behavior and good school performance lead to recognition on the part of the parents.

Also interesting:
Learning The Clock: With A Good Plan, Lots Of Patience And Even More Fun

At the same time, the child is often dependent on his or her family for support in learning. He needs help with his homework if something is not clear to him. Sometimes motivation is needed from the parents to continue to enjoy learning. On both sides (i.e. on the part of the children as well as on the part of the parents) there are now strong expectations that bring a very special dynamic into the parent-child relationship. This changes, but can still remain very intimate.

The parents now have to catch the child again and again when he feels overwhelmed in his confrontation with the adult world. They give him the feeling again and again that he is allowed to be a child.

On the other hand, the child now spends a lot of time outside the family. In the morning, he goes to school. In the afternoons, there is learning support or they meet up with friends. Additional educational activities and hobbies come into play. The older the child gets, the more he or she will eventually become detached from his or her parents. The new, ever-expanding view of the world allows for a different view of adults. With the onset of puberty at the latest, the child finally realizes that although parents can be trusted, they are still not always right.