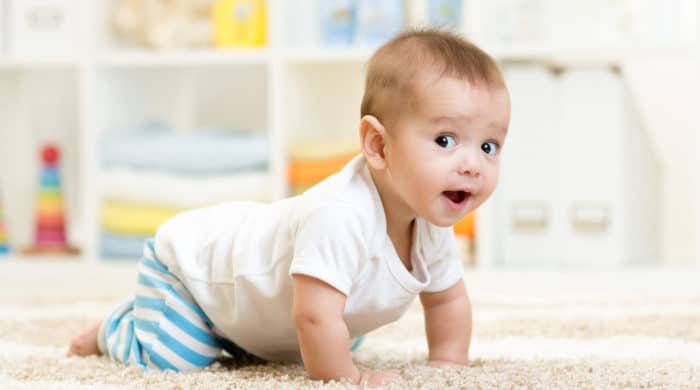 You may have heard of it, seen it in pictures, or experienced it yourself: some newborns have a large red spot on the back of their neck.

Doctors call it nevus Unna. This is a special form of a port-wine stain. Midwives and obstetricians speak of the so-called stork bite.

What this neologism is all about, where the distinctive marking comes from and whether it is dangerous for your baby, you can find out here:

How The Stork Bite Got Its Name

The term stork bite comes from a time when children did not receive any sexual education.

Unlike today, parents left their offspring for as long as possible in the belief that the infant would mature in a pond, be taken out after a certain time and brought into the house by a stork.

At the point where the bird grabs the baby to lift it out of the water, an unmistakable mark appears – the stork bite.

A cute, albeit untenable notion. For the European white stork, on which the legend is based, weighs as a full-grown animal about as much as a child at birth.

With a baby of about 3,500 grams, it would be hopelessly overburdened. However, the weight gain of a baby is always different.

Apart from that, we wonder how pregnant mothers explained their inexorably growing bellies to older siblings.

Also interesting:
Constipated Nose In The Baby: How You Can Relieve The Breathing Difficulties

From the second trimester on, it can hardly be hidden – and the baby is still in it for at least 5 months.

Individual And Unique – Every Stork Bite Is Different

But no matter how the women talked themselves out of it at the time: The term “stork bite” has gone down in medical history and is still used today.

It refers to the spot described above, which can already be seen at the birth of your baby and varies greatly from one baby to the next.

Its extension and coloration do not follow any rule. They vary from child to child and make each stork bite unique.

It can measure a few millimeters, but it can also be much larger and occupy an area of several centimeters. In some babies, the stork bite sits directly in the fold of the neck and is barely visible.

In others, it runs across the entire back of the head or protrudes into the shoulder area.

The color differences are also considerable: in some babies, the stork bite appears as a pale pink spot, in others it shimmers in shades of pink or a strong shade of red.

Occasionally, the mark is also bluish in color.

Common, But Transient – The Stork Bite As A Temporary Companion

But you don’t have to worry if your little one shows such a mark after birth. The mark appears in almost every baby.

A staggering 60-70 percent of all children are born with a stork bite. Perhaps you were also affected as an infant and lost the mark in the same way as everyone else: through natural regeneration.

The stork bite disappears all by itself during the first two years of life. It marks your baby quite intensively for 5 months, but then fades visibly and is completely gone around the second birthday.

Grandparents and other relatives usually know the stork bite from their own children and can tell you about it from personal experience.

Often such life reports help more than scientific excursions. They give you the certainty that the stork bite is a mostly harmless phenomenon, which very often completely regresses and only in rare cases persists permanently.

Also, if it accompanies your baby for more than 5 months or even beyond the toddler stage, it usually does not pose any danger.

Fact Check – The Stork Bite In The Focus Of Science

Is the stork bite perhaps not as harmless as described, but as worrying as it seems when it is large and dark in color?

Researchers have addressed these and other questions relatively recently. Scientific findings on stork bite date from 1894 – the year in which Paul Gerson Unna published his work “The Histopathology of Skin Diseases”.

In it, he described not only dermatological problems but also the well-known stork bite.

He described it as a nevus – a benign change that is noticeable by its striking coloration. Unna named a malformation of the vessels as the cause and classified the stork bite as a port-wine stain.

How wrong and at the same time right he was, proves the following comparison.

Both drawings have in common a fundamental dysfunction of the vasomotors, the vascular nerves. Under normal circumstances they regulate the width of the blood vessels down to the finest capillary conduction.

In the presence of a defect, they are unable to perform this task or can do so only inadequately. As a result, there is a permanently increased blood flow, which shimmers more or less strongly through the skin.

But while a real port-wine stain becomes larger and darker with age, a stork bite hardly changes. It retains the extent and coloring it had at the time of birth.

When the baby cries because it is hungry or has a tummy ache, the intensity of the hue may increase and change from a lighter shade to a darker one.

This change does not exist in the case of the port-wine stain, which is why it is another criterion to distinguish the stork bite from its kin without any doubt.

In the long run, the disappearance is added. After the stork bite has marked your baby for 5 months, it gradually becomes paler. A port-wine stain, however, remains as a lifelong companion and individual characteristic.

Besides all these exciting facts, we do not want to hide the fact that a stork bite can also be problematic. The port-wine stain can also appear on these parts of the body:

Here the stork bite is not necessarily dangerous for your baby, but should be urgently distinguished from the port-wine stain in 5 months.

Stray Bite On The Back

If a skin area above the spine is affected, a sting bite can indicate defectively formed vertebral arches or damage to the spinal cord. If so, your baby should be screened for the different forms of spina bifida well before he or she turns 5 months old.

Stork Bite On Arms Or Legs

If placed on the arm or leg, the discoloration may indicate Klippel-Trénaunay syndrome.

This condition, which is extremely rare worldwide, affects the function of the venous valves, which can lead to varicose veins and lymphatic stenosis – which in turn cause giant growth of the affected limb.

Stork Bite On The Face

The redness can also announce problems in the area of the eyes or at the root of the nose. Here, there is a risk of Sturge-Weber syndrome – a combined disease of the retina and meninges.

If the doctors can rule out a port-wine stain or have determined that there is no danger from the drawing, you should be happy – because it means that your baby is basically healthy.

However, we can understand that the stork bite bothers you in such a predestined place as the forehead or the root of the nose.

Then please keep in mind that there are no perfect children. Your little one wants to be accepted and loved as it is.

The more you look at your baby over the 5 months, the more natural the charismatic mark will seem to you and eventually become a lovable part of the little personality.

In addition, for the striking drawing exists: in the vernacular, a stork bite on the forehead or the lid of the eyelid is called an angel kiss.

This enchanting term refers to a lucky coincidence: Your baby is under very special protection for at least 5 months and thus provides you with the best reason to accept its stork bite as an individual feature.