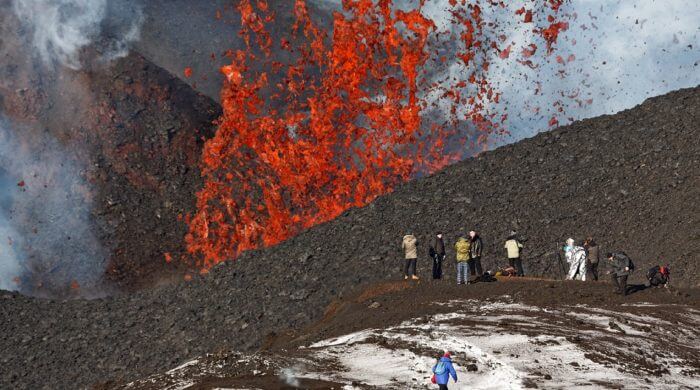 43 years after its last eruption, the Volcano Cabulco in south Chile spewed ash and lightning again on Wednesday and Thursday of last week. Cabulco, a 2,000-meter-high mountain, spewed its ash up to an altitude of 20 kilometers. It had last done so in 1972. Many residents living dangerously close to the mountain tamed their fear and took video footage with their cell phones of the eruption. Cabulco Volcano is one of the most dangerous volcanoes in the country precisely because it has been so quiet.

Into The Safety Zone

The Minister of the Interior of Chile, Rodrigo Penailillo, had asked residents who lived too close to the mountain to leave their homes and get to safety because usually, it does not stop at one eruption. More than 6000 people had to be brought to safety. In an area of 20 kilometers around the volcano, it is not safe, said the Minister of Interior. When the huge ash cloud spewed by Cabulco collapses, the hot air descends to earth. Early in the eruption, rivers full of mud and Avalanches full of debris down the slope of the volcano.

After a few days, the jet of ash spewed by the volcano had shrunk to two kilometers and the eruptions had become weaker. Still, another eruption could happen at any time, geologists say. As of last weekend, the wind had also caused the ash cloud to Santiago de Chile, Buenos Aires in Argentina, and Montevideo in Uruguay reached. On the houses and streets around the Cabulco is half a meter of ash. Some houses were not stable enough. Their roofs were dented by the weight of the ash. In Argentina, some airports had to be closed, because of the ash cloud. However, people have not been killed so far.

Volcanoes are fire-breathing mountains that spew lava and ash outward from the earth’s interior.

Chile is a country on the South American continent.

An avalanche occurs when more and more debris and rocks roll down a slope.

Also interesting:
Not All Children Like To Go To School

Santiago de Chile is the capital of Chile.

Buenos Aires is the capital of Argentina, the neighboring country of Chile.

Montevideo is the capital of Uruguay, another South American country bordering Argentina.