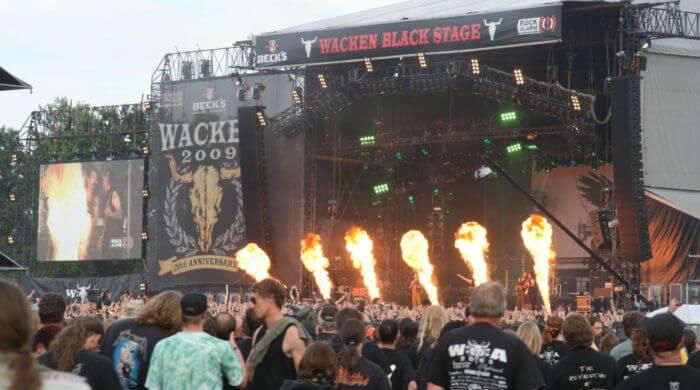 It is the biggest and most popular Heavy Metal Festival in the world: The Wacken Open Air in Schleswig Holstein. Every year about 75,000 metal fans from all over the world come to the small village in northern Germany and celebrate the biggest party of the metal scene for 4 days. Normally the sun burns from the sky while the bands perform on the 5 stages of the Wacken Open Air, but this year everything was different and the Wacken Open Air sank into mud and cold.

The Wacken Open Air: Metalheads From All Over The World Celebrate Together

The small village of Wacken in Schleswig Holstein was completely unknown for years. Until a few locals had the idea to organize an open-air festival. The Wacken Open Air was born and became bigger and bigger. In 1996, they took the bold step of hiring the Böhsen Onkelz, one of Germany’s biggest rock bands, for the festival, which drove ticket sales to unimagined heights. As of now, Wacken was the biggest metal festival in the world and still is today. The presale for the Wacken Open Air is finished every year after not even 2 days because all 75.000 tickets for the festival are sold out by then. The inhabitants of Wacken have become accustomed to the fact that once a year hordes of metal fans dressed in black invade their village and it gets very loud. Come join the party, some earn a lot of money from it and others flee to relatives for a week.

Cold And Mud Instead Of Sun And Party

This year the weather gods were not kind to the Wacken Open Air. Where there was usually a risk of sunburn, this year there was only mud up to the knees and freezing cold, especially at night. Cars got stuck in the mud, tents ran full of water and dirt. But metal fans wouldn’t be metal fans if they let that spoil their fun. Nevertheless, the party went on all week and thousands of fans celebrated at the performances of In Flames, Savatage, or Cannibal Corpse. And also in 2016, the party in Wacken will go on because the Wacken Open Air 2016 is already sold out.

Heavy Metal is a style of music that is characterized mainly by electric guitars and a high volume. In Germany there are now many heavy metal festivals besides Wacken Open Air- the most famous are With Full Force Open Air and Summerbreeze Open Air.