Home > Child > Kids news > Some Have Little. We Have Nothing – When Children Grow Up In Poverty. 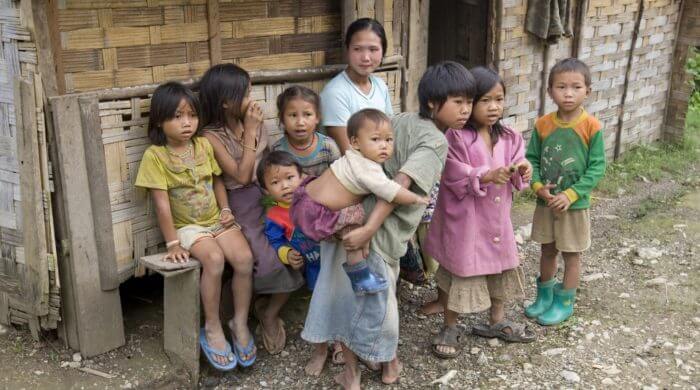 There are children who have less than others. This is also the case in Germany, Austria and Switzerland. Some families are very large, leaving little money for the individual children. Because it is not easy for parents when they have to take care of five or more kids. Most of the time, even if you live very frugally, the money is barely enough.

Why do some people have little money?

Many can’t help being poor. Large families and single parents have a hard time raising enough money for their children. Single parents are called fathers and mothers who raise their children alone (that is, without a partner). This is the case, for example, when a parent has recently died.

Older people are also often short of money. After a certain age, it is difficult to get a job. If you’re already retired, by the way, you don’t have it any easier. Most state pensions are quite small. They are just enough to live on.

Serious accidents, illnesses or deaths in families can also unexpectedly lead to poverty. Also, many young people look for work but do not get a job. They constantly apply for different jobs but are never accepted. If you don’t have a good education, it is especially difficult to get a job.

Not everyone is innocent of their own poverty. If you don’t want to work and are unemployed, you don’t have a lot of money available. Such people live on state welfare. If they have children, they get a little more money. But at the end of the month, there is hardly anything left over to save.

Also interesting:
Oldest Person In The World Died: Misao Lived To The Age Of 117

Still other people have debts with other people or in the bank. Such a situation is particularly unpleasant. Because the bank charges people extra money for lending them their money. So the mountain of debt keeps growing instead of getting smaller. A large part of the salary must then be used to repay the debt.

Are there also poor people in my country?

As you can see, there are many reasons for poverty. It happens again and again even in comparatively rich countries. This also applies to the country in which you live.

But there are not only beggars living on the streets. Many people have a little money to live on, but it is usually not much. With what they have, these people cannot go on vacation, buy their children new toys or go on trips. They have to live very frugally.

This is also noticeable when buying food. Some families have to buy food as cheaply as possible in order to feed all their children. If food or gasoline for the car becomes more expensive, these families face a huge problem. Many have no car at all because they cannot afford one.

In Central Europe, it is common that parents do not have to pay school fees for their child. Only private schools are different. Nevertheless, poverty is also a problem in this respect. Because in some areas the difference between state and private schools is enormous. Poor children thus have much worse chances of getting a good job or even going to university later on.

In order to support poor people, there are various forms of assistance from the state. In Austria, for example, every resident is entitled to financial support. The amount of money that one gets with it varies greatly. Usually it is around the subsistence level. This is the amount of money that is needed each month for the most basic necessities. This money is intended for food, rent and school supplies.

By the way, this is not the case everywhere! In some countries, there is hardly any financial support from the state for poor people. Many do not even have health insurance. In our country, health insurance covers the costs of your visits to the doctor and hospitalization. Since poor people in other countries often cannot afford a doctor, there is no adequate medical care for them.

Do you know someone who is poor? Or maybe you are affected by it yourself?

Poor families have less money to spend than most. This can sometimes be very uncomfortable for the kids of such families. Imagine a classmate bragging about what great jobs his parents don’t have. It’s not uncommon for kids to try to outdo each other. Kids who can’t keep up are quickly marginalized. They feel hostility and exclusion, even though they can’t really do anything about their parents’ financial situation.

Some kids try to protect themselves by keeping quiet about their poverty. What starts with a white lie sometimes grows into a web of lies. There is often no turning back. At the beginning, it is easy to present one’s own situation to classmates as better than it really is. Gradually, however, this can become very exhausting.

But why are people ashamed of being poor if they can’t help it? The answer is very simple. Children want to belong. Someone who is different has a harder time than “normal” kids. Young kids and teenagers can be very cruel. That’s why poor kids are afraid to tell about their family’s poverty. They don’t want to be teased or outcast.

Not all children try to protect themselves by lying. Some withdraw completely into themselves and are very quiet. Others start to become aggressive and try to assert themselves by means of fights.

Some kids perceive their poverty as something normal and can live with it relatively well. Nevertheless, almost all poor children behave differently in some situations than kids from wealthy families. For example, they may be more anxious when something is broken or lost. If their school supplies or private things are wantonly destroyed by classmates, they suffer particularly badly.

Because they’re not used to it any other way, some kids have a hard time assessing themselves and the extent of their money troubles. They are not only ashamed, but also find it difficult to talk about their situation.

Most children do not complain about domestic conditions when asked about them. This is because, as with other children, the cohesion of their family is much more important to them than anything else. Because there are also leisure activities for which little or no money is needed, they get along well. However, if money is not even available for clothing and sufficient food, both young and older kids suffer greatly.

Also interesting:
Halloween: The Night Of Witches And Ghosts

As you have already read above, such kids are often teased at school. Therefore, it is important that these kids get into a good school with understanding teachers and good class cohesion.

Ways out of poverty

However, the teasing alone is not the worst thing that can happen to children from such families. Children from poorer families hardly ever make it to university later on. Grants and scholarships from the state can help out. However, it is not easy to get by as a young adult without parental help. By the way, scholarship means money that you get if you have good grades. In some countries there are also scholarships for young people from poor families. This scholarship is meant to be able to pay for your own apartment, food and study materials.

Sometimes it is also possible to go to night school while working. In any case, kids from poor families learn to struggle through at a very early age.

Worksheet for the text

2) What do you think? Are there poor people in your country too?

3) Have you ever seen a beggar or had other experiences with poor people? Draw a picture about it.