Home > Baby > Week after week > Your Baby At 4 Weeks: How Your Baby Has Developed So Far 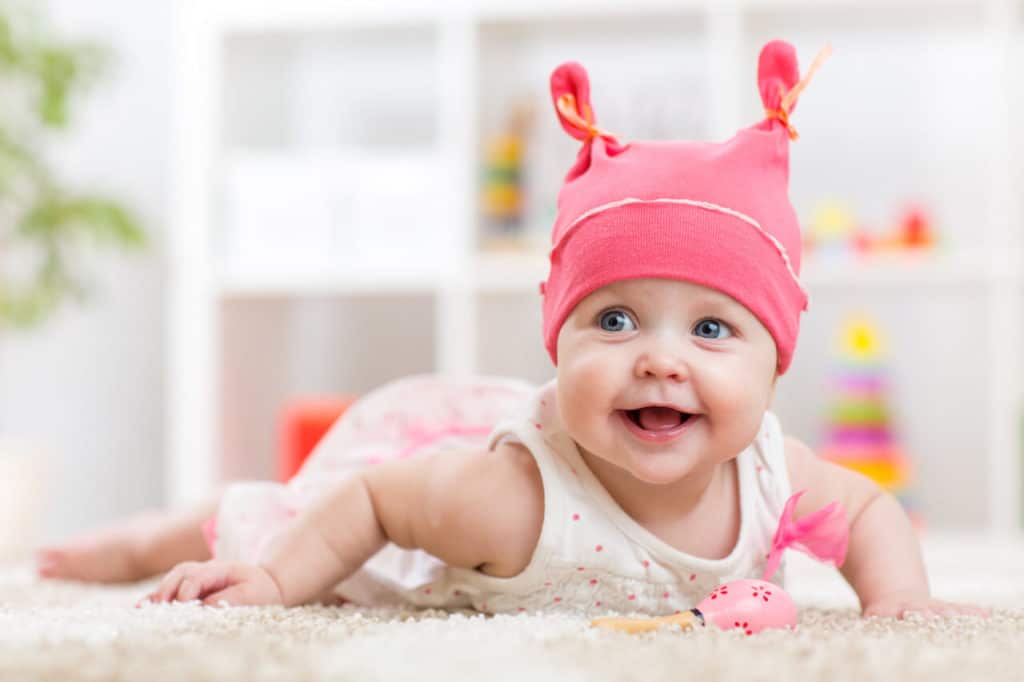 Your baby is 4 weeks young and has undergone an amazing development up to this point. Your offspring even already has an emotional memory.

By the time your baby turns 4 weeks old, he or she has already accomplished an enormous amount: It has successfully adjusted to the world “out there” in the last few weeks. The senses of smell, taste, touch and hearing are well developed and at four weeks, your baby can already remember things and have a certain level of expectation.

Your Baby At 4 Weeks: Physical Development

Your baby is 4 weeks old and has already undergone an exciting development. Your offspring has gained about 200 grams a week and has grown about five centimeters.

The circumference of your baby’s head has also increased rapidly. The first rompers will soon no longer fit. Learn more about the development of your baby’s motor skills, reflexes and senses.

Development Of Motor Skills And Reflexes

Babies are born with early childhood reflexes that serve to protect themselves and ensure survival. For example, when you touch your baby’s palms, the little hands close automatically. This is the so-called grasping reflex, which enables your baby to hold on to objects and fingers.

In the first weeks, your baby has many other reflexes, such as the search reflex, Moro reflex or cry reflex. When your baby turns 4 weeks old, these reflexes gradually regress and make way for more coordinated movements.

Also interesting:
Your Baby At 6 Weeks: These Developmental Steps Await You Now

Many babies already manage to keep their head upright for a few seconds in the prone position. This opens up a completely new perspective and is a particularly exciting experience for the little ones.

Even in a sitting position, some children already manage to keep their head upright for a short moment. Your baby is 4 weeks young and can now turn his head to the side and bend his legs and feet.

Your newborn may seem a little helpless at first, but his senses of smell, taste, touch and hearing are already well developed. Your baby can also see from the first second of his life.

The ability to see already develops in the womb. Your child can therefore see immediately after birth. However, it still perceives its environment in a blurred way. Many abilities, such as binocular vision or the ability to distinguish shades of color, develop only in the following months.

When your baby reaches 4 weeks of age, he will occasionally try to fixate on a certain point with his eyes. For a short time, he will also be able to look at the mobile above the bed and follow it with his eyes, fascinated.

This is important training for your offspring’s curious eyes. In this phase, there are already intensive eye contact with your baby for short moments.

Your offspring is born with a well-developed sense of hearing. However, the hearing ability still has to mature and develop over the next few months. In the first month, your baby prefers your voice and the voices of other familiar people.

Relatively soon after birth, your newborn can distinguish your voice from others. Your offspring perceives a variety of sounds in its environment and with time it becomes easier and easier to process them.

Also interesting:
Growth Spurt And Development Of Your Baby At 5 Weeks

By the time your baby is 4 weeks old, he or she has already gained a wide range of “listening experiences” and hearing is becoming more and more refined.

Sense Of Taste And Smell

The best developed sense at birth is the sense of touch. It is better developed than the senses of sight, hearing and taste. Your baby’s preferred organs of touch are the mouth and tongue from the beginning. This preference continues for several years.

The Mental Development Of Your Baby At 4 Weeks Of Age

Your baby is 4 weeks young and already perceives more things than you might think. It has an emotional memory. It has now been disproved that simple thought processes are tied exclusively to linguistic abilities.

When the baby is 4 weeks old, it imitates sticking out its tongue and blinking its eyes. This game is especially entertaining for the whole family. Learn more about baby’s emotional and social development at week four.

Your baby is already able to show basic emotions, such as curiosity, fright, squirming, and discomfort, and he or she has already developed an emotional memory. The first four weeks are a particularly sensitive phase in which your child needs a lot of security and closeness.

Midwives, psychologists and attachment researchers all come to the same conclusion: In the first few months, the so-called “primal sense of security” is created, which is important for your child to develop into a stable personality later on.

Also interesting:
Your Baby 14 With Weeks: The Most Important Developmental Steps

When your baby is 4 weeks old, it still shows the so-called “reflex smile”. This means that your child unconsciously pulls up the corners of its mouth while sleeping. It is not until around 6 weeks that the social smile appears, which is consciously directed at a caregiver.

Already after birth, your offspring communicates through first sound signals and cries. In about two weeks, your baby will also produce its first pharyngeal, palatal and guttural sounds.

How To Playfully Support Your Baby At 4 Weeks Of Age

In the first month, babies still spend a lot of time sleeping and eating. However, there are a few things you can do to encourage baby’s development through play. Remember that less is more – after all, babies are surrounded by many new sensory impressions.

Make a bell or rattle sound from different directions. Babies turn their heads in the direction of the sound source and thus train their mobility.

Take your baby on a so-called “tactile journey”. Stroke with a cloth and feathers over the different body parts of your favorite. This promotes body awareness.

These Examinations Are Due

When your baby turns 4 weeks old, the U3 check-up is due. This is the first examination in the doctor’s office. An important goal of the U3 is to detect any developmental abnormalities at an early stage.

Also interesting:
Your Baby At 8 Weeks - The Most Important Baby Growth Spurts

For example, the doctor will check whether your baby can already hold its head in the prone position or observe close faces attentively. Your offspring’s hip joints are also checked by ultrasound so that any malpositions can be treated at an early stage.

Your baby is 4 weeks young and sleeps on average about 17 hours per day. During the day, he takes about 4 to 6 naps. Between these naps, your baby will be awake for about an hour. It will be several months before your baby sleeps through the night.

He wakes up several times during the night to drink. These interrupted sleep phases are completely normal and important for a healthy development of the baby.

Your offspring has grown intensively in his first month and has gained about 200 grams a week. The circumference of your baby’s head has also increased rapidly. In the meantime, you already need new baby clothes, because your child has already grown out of the first onesies.

Your baby is 4 weeks young and can hold its head for a few seconds in the prone position. In sitting position, the control of the head also succeeds for a short time. Your baby is able to turn his head to the side and bend his legs and feet.

Your baby’s senses of hearing, smell, taste and touch are already well developed. In the first few weeks, these senses will continue to mature. At first, your baby cannot see very well. At four weeks, your baby may already be able to focus his or her eyes on a specific point.

Your baby is 4 weeks young and has already developed a strong emotional bond with you. Closeness and security are particularly important for baby development now. As a result, your child will grow into a stable personality that can cope well with crises. 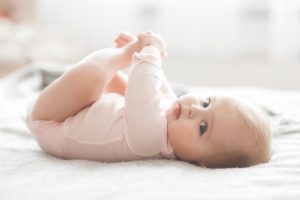 All Articles About Week By Week At A Glance 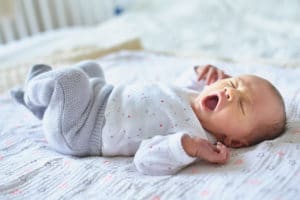 Your Baby At 10 Weeks: What Developmental Steps Are Ahead? 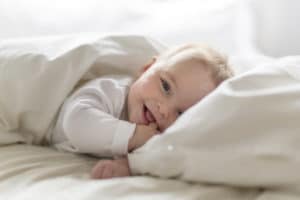 Your Baby At 7 Weeks: Developmental Milestones 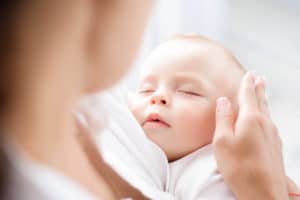 Your Baby At 6 Weeks: These Developmental Steps Await You Now

Your Baby At 12 Weeks: These Are The Things You Should Consider 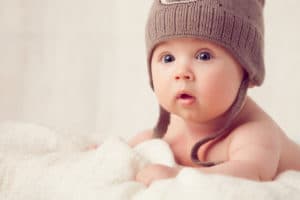 Your Baby At 3 Weeks: Developmental Steps At A Glance 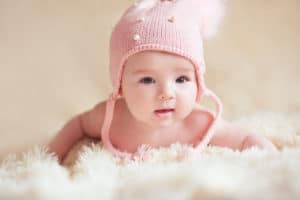 Growth Spurt And Development Of Your Baby At 5 Weeks 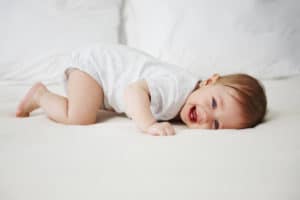 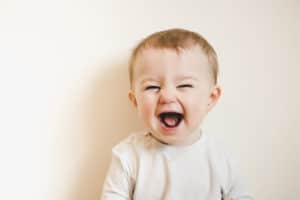 Your Baby Is 13 Weeks Old: The Developmental Milestones 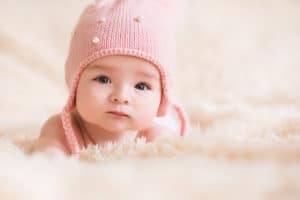 Your Baby 14 With Weeks: The Most Important Developmental Steps 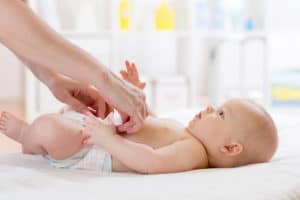 Your Baby At 8 Weeks – The Most Important Baby Growth Spurts