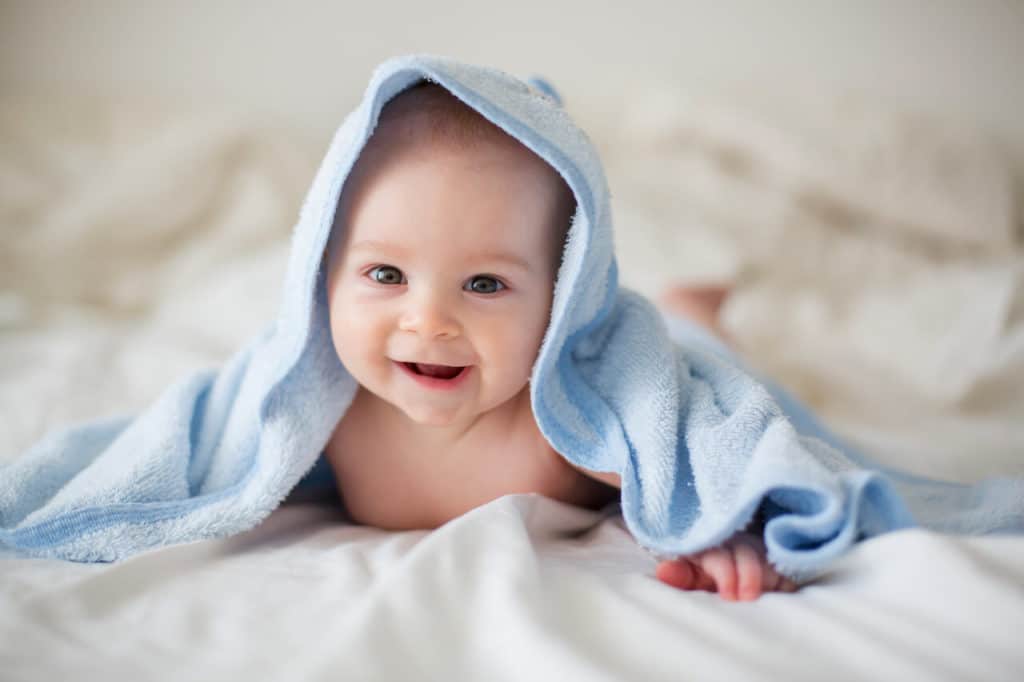 A rash in a baby can look different. Sometimes a rash on the face is noticeable in the form of small pimples. Then again, the rash may appear as patchy redness.

In any case, it is worth taking a close look at a rash. In most cases, red spots on the face are an indication of intolerance. Experience has shown that they can be easily treated and are often no longer visible after two or three days.

When Is A Visit To The Doctor Necessary For A Skin Rash In A Baby?

If the rash on the face is clearly visible and has not subsided even after several days, caution is advised. After three or four days at the latest, you should take your baby to the doctor to have the causes of the baby rash checked.

Doctors know that a baby rash often results from the fact that the child’s organism is not yet fully mature. Therefore, the dear little ones sometimes react very sensitively to external influences.

Skin Rash In Babies – Not Always An Indication Of A Disease

It happens that red spots on the baby’s face seem very bad, although the cause is ultimately harmless. On the other hand, it is also possible that only a few pimples appear, which in turn could indicate serious skin problems. In case of doubt, it is always worthwhile to consult the pediatrician in case of a skin rash.

This way you can be on the safe side and also get valuable medical tips for effective treatment. In most cases, tried and tested home remedies already help to get rid of the skin rash in the baby.

What Is An Exanthema?

A skin rash in babies, but also in adults, is called exanthem in the medical world. The rash usually appears very suddenly and can appear on a wide variety of body parts.

The appearance can also vary. For example, red spots appear on the baby’s face, or vesicles or scales form on the skin. The triggers for the rash on the face or body are either skin diseases or allergies.

Also interesting:
Osteopathy For Babies - How To Relieve Health Complaints

Infectious diseases such as measles, scarlet fever or chicken pox can also be the cause of a rash. Neurodermatitis or psoriasis are usually accompanied by a very persistent, itchy skin rash in babies. Adults can also be affected by this annoying skin disease.

A skin rash is a specific reaction of the skin as a “response” to internal or hormonal or external influences. This reaction can manifest itself not only as red spots on the face, but also in the form of blisters, nodules, or redness. Weeping skin patches and/or itching are also troublesome consequences of these influences.

When Should You Go To The Pediatrician If Your Baby Has A Rash?

After a detailed discussion with the patient, a physical examination of your child will follow. This may require a tissue sample, a skin swab, or an allergy test. In most cases, the physician will draw blood from the little patient in order to be able to make a targeted diagnosis in this way.

What You Should Know About Your Baby’s Skin:

The skin of a human being consists of over two billion cells. Thus, the skin is the largest organ of the human body. It protects the body from sunlight, overheating, dehydration, and excessive heat loss.

It is also an excellent protector against pathogens. In babies, it covers an area of about 0.75 square meters and weighs a total of two to three kilograms.

Also interesting:
Why Is Vitamin D So Important For Your Baby?

As much as human skin protects us, we should also take care to protect the skin. Especially the skin of babies and small children is very sensitive and usually reacts immediately to internal and external influences. These are usually visible within a very short time.

Thus, The Skin Changes Due To Rxternal And Internal Influences

If the skin changes visually, this is referred to in technical jargon as efflorescence. If the baby’s skin rash only appears in individual areas, it is referred to as an exanthema. It is quite possible for the rash to appear on the face, fingers, hands, or legs.

Even the mouth and throat area is not immune to rashes.

Doctors speak of eczema when a skin rash occurs in a baby or an adult, which is caused by a skin inflammation. Thus, eczema is always a non-contagious inflammatory disease of the skin.

Regardless of whether internal or external influences are involved, eczema can develop relatively easily, especially in children, but it can also subside completely within a few weeks.

The Most Common Skin Rashes

A sore bottom or so-called diaper dermatitis often occurs in babies. The skin on the bottom is red or irritated. This is referred to as “soreness”. Usually the baby feels great pain when the skin is more irritated.

A visit to the doctor is usually not necessary for a sore bottom. Rather, you can help to soothe the skin with a good wound protection cream.

A rash on the face in the form of small, hardened or white pimples is nothing dramatic in itself. They are the so-called milia, which are simply caused by clogged sebaceous or sweat glands.

In infancy, but also in adolescence, many young people struggle with milia. It is important that you don’t push on it, but simply “sit it out”. Because milia are usually a thing of the past again after a few days.

Even newborns can suffer from neurodermatitis. This so-called psoriasis is associated with scaly, weeping or inflamed skin areas and can be very itchy.

The skin disease is usually experienced by sufferers as very agonizing. Close cooperation with an allergist and a dermatologist is therefore essential for parents with a child suffering from neurodermatitis.

Because babies’ skin is very sensitive, it usually reacts highly sensitively to the effects of cold and heat. Pimples, red spots on the face, but also rough and even cracked areas can develop.

Protect your baby from the summer heat and the dangerous UVA and UVB rays of the sun. In addition, your child’s skin should never be exposed to cold weather without protection. It’s best to use a rich, fragrance-free cream – and warm clothing.

Many babies experience cradle cap. The flaky coatings on the scalp are sometimes confused with head urticaria. While cephalopal nephritis is absolutely harmless, cradle cap may require medical treatment.

If in doubt, it is best to consult your pediatrician at the first sign of scaly skin.

Three-day fever is a viral infection. It is most common in babies and toddlers between the ages of six months and three years. If your child has a high fever, it may be the first sign that he or she is struggling with a three-day fever.

Once the fever has subsided, tiny red spots will become noticeable all over the body. This rash is usually easily visible for about two to three days. However, it does not itch or hurt and usually disappears after a short time.

It is advisable to consult a pediatrician and to make sure that the baby drinks enough fluids.

Also interesting:
Microcephaly: What Is Behind This Malformation?

From a layman’s point of view, it is often hardly possible to find out which rash it is in each case. It can be helpful at first to find out where the rash has occurred.

In professional circles, this is referred to as localization. The visual inspection of the appearance with regard to the type, extent, and course of the rash is called efflorescence. These two factors are often indicative in determining the cause of the rash.

Is the rash in the diaper area? Then it could be diaper dermatitis or a fungal disease or thrush.

Is it mainly the trunk that is affected by the rash? Can the rash also be seen on the arms and legs? Do you also notice blisters on the oral mucosa of your child? Then it could be scarlet fever, measles, or chickenpox.

Chronic dry eczema, which appears with slight tears in the area of the earlobes, is usually a sign of psoriasis. Does the skin rash occur on the face and also on the body and arms and legs? It could be a drug or food intolerance.

If your child’s rash is accompanied by severe itching, it might help to give so-called antihistamines. This is especially beneficial if your child cannot sleep well at night because of itching and/or pain. However, the arbitrary administration of medication is not recommended in any case.

Experience has shown that the rash can sometimes even worsen as a consequence. It is best to consult a doctor. This is the best way to help your child. In addition, you will usually get valuable tips and suggestions from an experienced doctor on how you can better prevent another skin rash in the baby in the future.

How The Pediatrician Helps

Depending on the type of rash and the cause, the doctor will use different forms of treatment. Often the administration of antibiotics or antivirals helps.

While an antibiotic does not help with a viral skin disease, a virostatic is not recommended for bacterial skin diseases. Local treatment of the affected skin areas with creams or ointments is the most common method of combating the rash in the baby and providing relief.

1 thought on “Baby Rash: The Most Common Causes And Treatment Options”