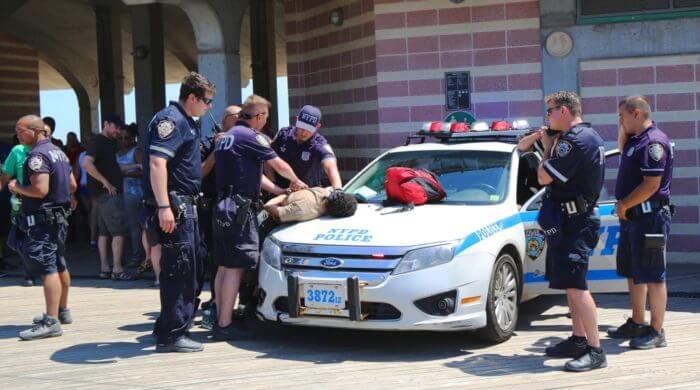 Policeman Fears For His Life And Shoots 12-Year-Old Boy

A video showing the incident shows the police officers arriving and shooting 12-year-old Tamir Rice within seconds. The boy is killed instantly. The police were called by a man, but he already said on the phone that it was probably not a real gun. The police did not call anything to Tamir, nor did they tell him to put the gun down or lie on the ground or anything like that. The policemen got out of the car and pulled out their guns. One of the policemen immediately shot Tamir, hitting him in the stomach. When questioned, the policeman stated that he acted in self-defense because he was afraid for his own life. It is possible that the policeman who shot Tamir will not even have to appear in court and that there will be no charges.

Also interesting:
German As A Foreign Language In Great Demand

The 12-Year-Old’s Death Just The Tip Of A Series Of Police Brutality Cases In The U.S

Tamir’s death is just one of many examples in recent years of excessive police violence against Black and its consequences. Several times, completely innocent black people have even been killed or seriously injured by police officers. Many people are demonstrating against this on the streets of American cities and thus show that they do not put up with it when those who are supposed to look after the population become perpetrators and often get away with it.

When someone acts out of Self-defense he does so out of fear of being injured or killed himself. If a court sees it the same way, you will not be punished if you really acted out of self-defense.

People with dark skin are called Black or colored people.