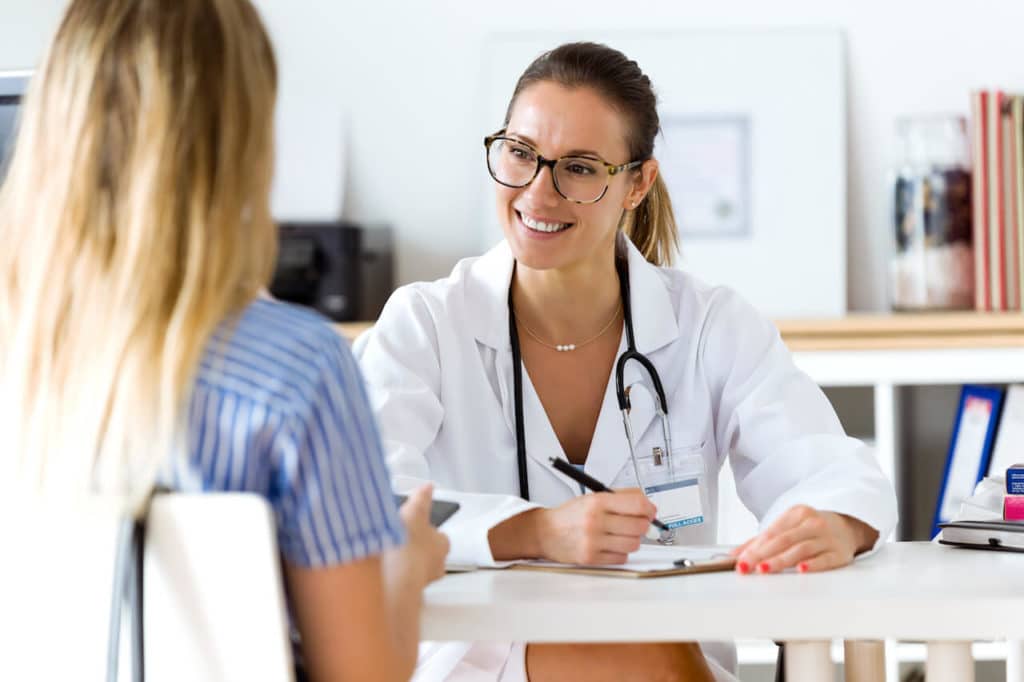 In many cases, mastopathy does not require treatment. In more severe forms, which are often accompanied by pain in the breast, medical measures must be taken. We present the different therapies. Furthermore, you will learn in which cases you should consult a doctor.

Mastopathy is the most common mammary gland disorder in women. The appearance is very different. Most often, benign changes occur in the form of swellings, cysts, and lumps in the breast. A feeling of tension and pain in the breast (so-called mastodynia) can also be a sign of mastopathy.

On breast palpation, slidable lumps can be detected that are about the size of a cherry pit and are slidable. The breasts are often very sensitive to touch. Only in rare cases does fluid leak from the nipple. Mastopathy is almost always seen in both breasts.

The majority of these breast changes are benign. However, in about 3 to 6% of the changes, mammary carcinoma (breast cancer) is found. Mastopathy particularly affects those between 30 and 55 years of age. After menopause, the symptoms usually disappear completely.

Mastopathy results from a hormonal imbalance, when an excess of estrogens is opposed by a deficiency of progesterone. The excess estrogen can lead to a type of inflammatory response.

The increased estrogen level results in painful swelling of the breasts about a week before menstruation begins. It is also possible for the pain in the breasts to radiate to the armpit region.

These are benign changes and not, as in the case of fibroadenoma, true growths (tumors) that have formed. With the onset of menopause, the symptoms cease and the swellings, lumps and cysts regress in most cases.

However, the most common expression is the combination of both forms of the disease, which is called “fibrous-cystic mastopathy”. The symptoms and the intensity of the changes vary greatly.

In the days before your menstruation, pay attention to whether you notice any peculiarities. If your period is completely absent, it is very likely that you are pregnant.

What Are The Different Forms Of Mastopathy?

Three Degrees Of Severity Of Mastopathy

Depending on how severe the symptoms are, mastopathy is classified into 3 degrees of severity. These are significant for the prognosis.

Mastopathy grade I, which is also called “simple mastopathy”, occurs in about 70% of cases. In this case, the connective tissue is increased only to a small extent. The number of cysts (a fibrous mastopathy) is low and the glandular cells show no growth.

The risk of breast cancer is not increased. Severity in the breast does not occur with this severity grade.

Grade II mastopathy, also called “simple proliferative mastopathy”, occurs in about 25% of cases. In this case, the glandular cells grow without changes. Characteristic is the appearance of small nodules, scars and narrowed milk ducts. These could affect the output of breast milk. The risk of breast cancer is increased twofold.

Also interesting:
Vaginal Fungus - Where Does It Come From And What Can I Do About It?

Grade III mastopathy is also known as “atypical proliferative mastopathy” and “severe mastopathy”. This severity occurs in approximately 5% of cases. Pathological changes of the tissue are typical. If the cells degenerate, there is a greatly increased risk of breast cancer.

In the area of the mammary ducts, the glandular cells multiply more markedly (hyperplasia). Both the cells and the cell nuclei change and develop into malignant tumors. In grade III mastopathy, the risk of breast cancer is slightly twice to three times higher than in grade I mastopathy.

Women with second- and third-degree mastopathy should have regular exams to detect tumor formation early.

Women Affected By Mastopathy Have The Following Complaints:

A pulling sensation and greater sensitivity of the breast to touch could also be possible signs of pregnancy.

Palpation Of The Breast

The gynecologist palpates your breasts for hardening. You should also palpate yourself regularly. The days directly after menstruation are best suited for this, because the breast tissue is relatively loose then.

This examination method can be used to determine whether tissue changes and connective tissue nodules or cysts are involved and whether there is a growth of atypical tissue. If single, large cysts cause severe discomfort, they can be punctured and emptied under permanent ultrasound monitoring.

Mammography (X-ray of the breast)

In the case of higher-grade mastopathy or if there are suspicious areas of tumor on ultrasound, your doctor will order a mammogram. Tip: For patients with mastopathy, mammography is often very painful because the breasts have to be squeezed as flat as possible for optimal quality of the X-ray image.

You can get pain medication for the exam.

In order to clearly distinguish a benign change from breast cancer, it may also be necessary to perform a tissue sample (biopsy) of the breast. For the cell examination, fluid or tissue is removed from a lump or otherwise suspicious area with a hollow needle.

From the sample, the doctor can determine how much the breast tissue has changed. To clearly differentiate a benign change from breast cancer, it may also be necessary to perform a tissue sample (biopsy) of the breast.

For the cell examination, fluid or tissue is removed from a lump or otherwise suspicious area with a hollow needle. From the sample, the doctor can determine how much the breast tissue has changed.

If your mastopathy symptoms are tolerable, you do not need any special treatment.

If breast pain (mastodynia) is the main symptom, the following measures can relieve the discomfort in many cases:

If mastopathy is accompanied by lump formation and pain in the breast, the lumps should be removed and and the tissue examined.

The use of analgesic medications may also be appropriate. Mastopathy is associated with an increased risk of breast cancer. Therefore, you should have your breast examined regularly for changes.

Fading Away Of The Symptoms After Menopause

The changes in the mammary gland tissue as well as the pain in the breast decrease after menopause, because then less and less sex hormones are produced. Often the complaints disappear completely.

When Should You See A Doctor?

You should see your doctor if the following points apply:

Cyst In The Breast – Often Harmless

The cyst consists of a sac-like lump surrounded by a capsule with a thin or thick fluid content. Breast cysts may be isolated (solitary cyst) or may occur in multiples, such as in mastopathy.

When a cyst is found in the breast, it may be a benign or malignant change. The term cyst does not say anything about it. A cyst in the breast usually does not require treatment. If you take the birth control pill, the formation of cysts is reduced.

What Discomfort Can A Cyst In The Breast?

In the days before menstruation, a cyst may be accompanied by mild to moderate breast pain and breast tenderness.

What Is A Fibroadenoma?

Fibroadenomas are benign growths (tumors) in the breast caused by the proliferation of connective tissue (fibroma) and glandular tissue (adenoma). They can be diagnosed by palpation, imaging techniques (ultrasound, mammography, MRI) and a tissue sample.

In most cases, fibroadenomas do not require treatment. If necessary, they can be surgically removed. Fibroadenomas are not associated with an increased risk of breast cancer. Fibroadenomas feel like sharply defined and movable lumps.

They can reach a diameter of 5 mm to 5 cm and are usually located in the upper half of the breast near the nipples. As a rule, fibroadenomas grow slowly.

Affected women almost never feel pain. The slight pain or tension in the days before menstruation also occurs in women without fibroadenomas, so it is not a specific indication of fibroadenomas.

Most women notice fibroadenomas themselves when they palpate the breast. Otherwise, they are discovered during cancer screening exams. One or more lumps can sometimes be found in the breast, which may be close together. The lumps in the breast are usually not sensitive to pressure.

Mastopathy can have a very different appearance. In most cases, the changes in the mammary gland tissue are benign and do not require treatment. In case of lumps or hardening, discharge of secretion from a nipple as well as pain in the breast you should consult your doctor.