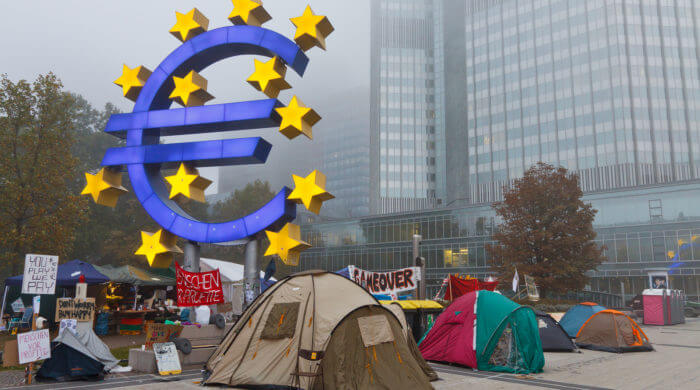 Fight Against Politicians And Business Bosses

The demonstrators wanted to show clearly in Hesse show what they do not like. In Europe, many people are currently poor and have no work. Especially countries like Spain or Greece have money problems and many unemployed. The economy is not working in these countries and they are constantly asking for money. The European Central Bank (ECB) is one of three decision-makers that can give money to these countries. The ECB forces these countries to also save more because otherwise, they can’t pay back the borrowed money. Teachers, for example, then get less salary, grandmas and grandpas get less pension and medicines are very expensive. If the countries don’t comply, they won’t get any more money.

The protesters believe it is unfair for the ECB to build itself a great new building and at the same time force countries like Greece or Spain to make savings everywhere. The protesters in Frankfurt don’t like the fact that people in Greece have to suffer because their politicians don’t have a clue about saving money. Many people no longer have jobs there and those who do work earn much less money. The protesters have extended tents in front of the ECB. Their movement is called Blockupy and with it, they want to show that powerful Institutions cannot do what they want without protest. During the demonstrations last week in Frankfurt, there were also Riots. A few demonstrators were there just to break something. They threw stones at police cars and in store windows and also set fires. That was not good, and so the policemen had to arrest many of these demonstrators.

The European Central Bank regulates financial matters for 10 European countries. It has its headquarters in Frankfurt.

Protesters are people who go out into the street and shout out loud what bothers them.

Hesse is one of the 16 federal states in Germany.

Riots are outbreaks of violence in which the police must intervene in a demonstration.

Blockupy is composed of the two English words occupy and block.

Protest means that people loudly express their opinion about something they do not agree with.

Institutions are companies and government bodies that decide on things that concern all of us.