Home > Health & Prevention > Female diseases > Suffering From Nausea After Eating? These Tips Will Help You 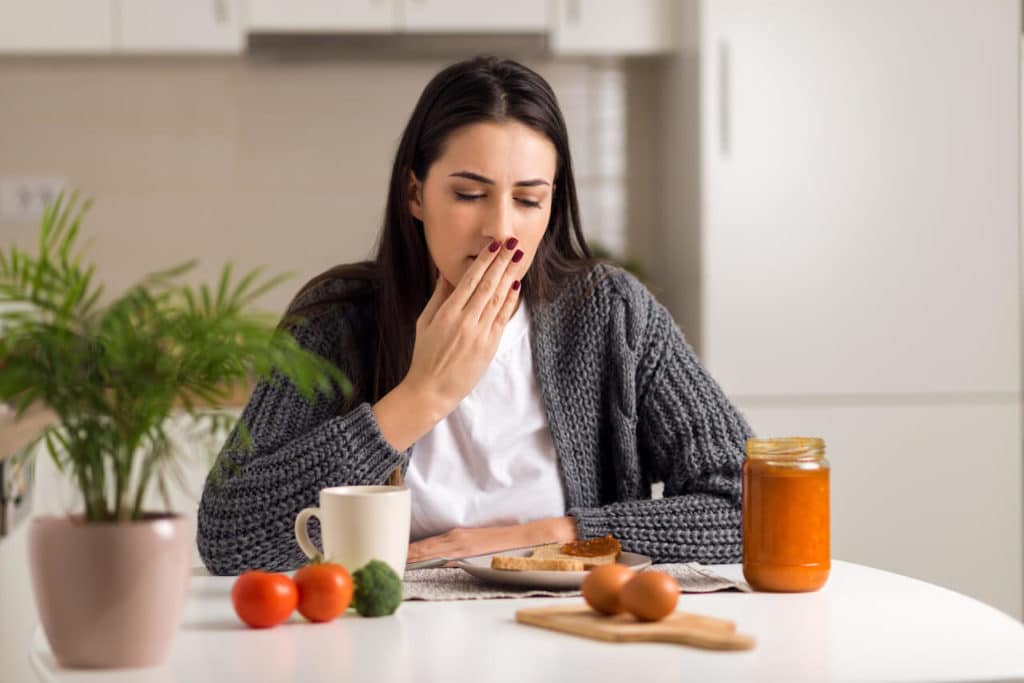 Many expectant mothers struggle with nausea after eating. Nausea, stomach pain and nausea are particularly common during the first three months of pregnancy.

However, these problems usually subside after about two to three months. Other women, on the other hand, suffer from it for a longer time, sometimes even until the end of their pregnancy. The causes of nausea after eating can be varied.

Nausea After Eating Is An Annoying Problem

Nausea after eating, accompanied by vomiting and air in the abdomen – all this can be stressful for an expectant mother. According to experts, it is primarily hormonal changes that trigger nausea after eating, stomach pain and stomach cramps.

According to the researchers, a rapid increase in the hormones ß-HCG and estrogen could be responsible in this context. This is because the woman’s sense of smell is highly sensitive as a result.

As a consequence, too much gastric acid is produced – and this with a simultaneous deficiency of vitamin B6. Moreover, physicians suspect that an imbalance of the blood sugar level could be the cause. Last but not least, stress and mental and physical strain are cited as triggers for nausea after eating.

What If Stomach Pain And Nausea Don’t Stop?

Whether after getting up, after breakfast, lunch or after supper – nausea after eating is normal for many pregnant women. All too frequent vomiting, on the other hand, is an alarm signal.

If you also experience frequent dizziness, dry mouth or even problems with urination, it is important to seek medical help. Such symptoms can be an indication that there may be another underlying disease.

Of course, this need not be a cause for alarm. Nevertheless, you are well advised to be on the safe side and simply have yourself medically examined.

Nausea After Eating – What To Watch Out For

If a woman already feels nauseous in the morning and has to vomit frequently, this is – if no other illness is present – sometimes a signal that a pregnancy is present.

Doctors are of the opinion that hormonal fluctuations cause the nausea. In fact, many women take these symptoms as an opportunity to take a pregnancy test.

When The Desire To Have A Child Has Been Fulfilled

If pregnancy is present, nausea after eating as well as occasional nausea in the 1st trimester are part of everyday life for many expectant mothers. This is not a big deal and therefore not a cause for concern.

Some women experience nausea after eating before they even know they are pregnant. Others start noticing nausea around the sixth week or first trimester of pregnancy.

The often associated feeling of having to throw up can last until the 12th week of pregnancy. However, there are no general findings in this regard. Rather, it varies from woman to woman.

It is said that nausea after eating is an indication that there is a particularly high level of pregnancy hormones in the body. According to old traditions, the risk of miscarriage is low. However, there are no scientific studies to this effect.

What If The Nausea Just Won’t Stop?

Less than one percent of expectant mothers suffer from the so-called hyperemesis gravidarum syndrome. According to the National Institute for Health Technology Assessment, it is an abnormal nausea during pregnancy that is accompanied by violent vomiting.

If left untreated, it can lead to dehydration as well as electrolyte imbalance. This often results in significant health effects for the pregnant woman and the unborn child.

According to the “Deutsche Ärzteblatt” (German Medical Journal), as many as 50 to 90 percent of pregnant women experience nausea after eating. Stomach cramps and stomach pain are also frequently associated with this.

Also interesting:
Hypothyroidism: Ways Out Of The Widespread Disease

Generally, the baby in the womb is not affected by the symptoms of nausea. However, only as long as you do not lose too much fluid and pay attention to a balanced diet throughout your pregnancy.

Here’s What You Can Do About Nausea After Meals

Drink a glass of lukewarm water in the morning after getting up. This will push your metabolism and help prevent nausea and vomiting.

Try to sit upright at each meal. This allows food to enter the gastrointestinal tract more easily and be metabolized directly. A slouched sitting posture, on the other hand, could prevent this from happening.

Chew each bite as intensively as possible. Enjoy what you eat. This is easy on the stomach and prevents air from forming in the stomach. Eat several small meals throughout the day rather than two or three large portions. This also prevents stomach cramps, stomach pain, and nausea after eating.

Heavily spiced foods can potentially increase the feeling of nausea after eating. Heavy food is not really good for expectant mothers. Instead, reach for light vegetables, fresh fruits, bread and cookies made from chickpea flour, etc.

Foods containing wheat flour can promote the development of nausea and air in the abdomen. Wheat as it is farmed and processed today has little in common with the healthy wheat of the 1950s.

This results in numerous intolerances, such as gluten intolerance, which can be very stressful not only for expectant mothers.

Make sure to keep a time gap of about two hours between meals. This is easy on the stomach and prevents air from forming in the abdomen. Avoid fast or sudden movements. During pregnancy, this can be stressful for the gastrointestinal tract.

If you don’t like certain smells or foods, try to stay away from them. This can also prevent nausea.

If nothing helps and you gradually lose weight due to nausea and frequent vomiting, then this has nothing to do with normal nausea after eating during pregnancy. You should be careful and seek medical help.

Be sure to counteract the weight loss if possible. In particular, the fact that your electrolyte balance could literally be out of whack due to fluid loss is alarming. Seek medical attention as soon as possible if the frequent vomiting persists for more than three days.

Does the vomit have a slightly reddish or even blood-red coloration? Or is it even dark or black? These are unmistakable signs that you are losing far more fluid than your body has absorbed. You should have the causes of this medically clarified as soon as possible.

Of course, nausea after eating is not really pleasant. But it is often part of pregnancy. However, many women still consider taking medication to do something about the nausea.

In fact, there are quite a few preparations that help against nausea after meals as well as against stomach cramps. Expectant mothers should not use these under any circumstances, as there are no relevant studies regarding tolerance for unborn babies.

In order to protect the well-being of the child, well-known pharmaceutical companies refrain from conducting corresponding studies. There are therefore no serious documents that could provide information about the advantages or any disadvantages of such drugs.

Instead of resorting to medication, home remedies such as fennel or anise teas are recommended. You can drink as much of them as you like – and at the same time, you are doing something good for your fluid balance. Teas made from lemon balm, chamomile, and coriander also have a soothing effect on the stomach and can help prevent air in the stomach.

Oatmeal for breakfast or in between meals – this binds the excess stomach acid and thus minimizes the risk of vomiting or having air in the stomach. Ice-cold water also works wonders if you want to combat nausea after a meal.

Also interesting:
All Articles About Women's Diseases At A Glance

Experience has shown that many expectant mothers use ginger because the tuber works very well against stomach pain or stomach cramps. However, it is also a fact that ginger promotes labor. From the 15th week of pregnancy you should therefore avoid it.

These Factors Can Aggravate Stomach Pain And Nausea After Eating

Certain influences and stimuli can aggravate nausea after eating. These include certain odors, such as the smell of meat or coffee. Onions or the smell of fruit can also literally make your stomach hurt and cause nausea.

Even if it is sometimes difficult to avoid such aromas – you should try to avoid this risk factor. If you can’t, you could spread a few drops of tea tree, peppermint, lemon, or bergamot oil on the back of your hand. As soon as you notice something unpleasant, just smell the back of your hand. Nausea after a meal will then probably not occur at first.

Stress and hectic pace favor nausea symptoms in pregnancy. Relaxation and sufficient sleep, on the other hand, are extremely helpful if you want to prevent stomach pain and nausea after eating. Fresh air also usually helps against the annoying bad feeling in the stomach and throat area. A low blood sugar level is often responsible for stomach pain. Therefore, take small, healthy snacks every now and then to counteract the risk of nausea as best as possible.

Nausea after eating is generally nothing unusual during pregnancy. However, if the symptoms such as stomach pain, nausea, and nausea occur with high intensity or if you lose more fluid than you have consumed, you should definitely consult your doctor.

Now it is important to investigate the cause, and immediate measures must be taken to protect your health and that of your unborn child as best as possible.