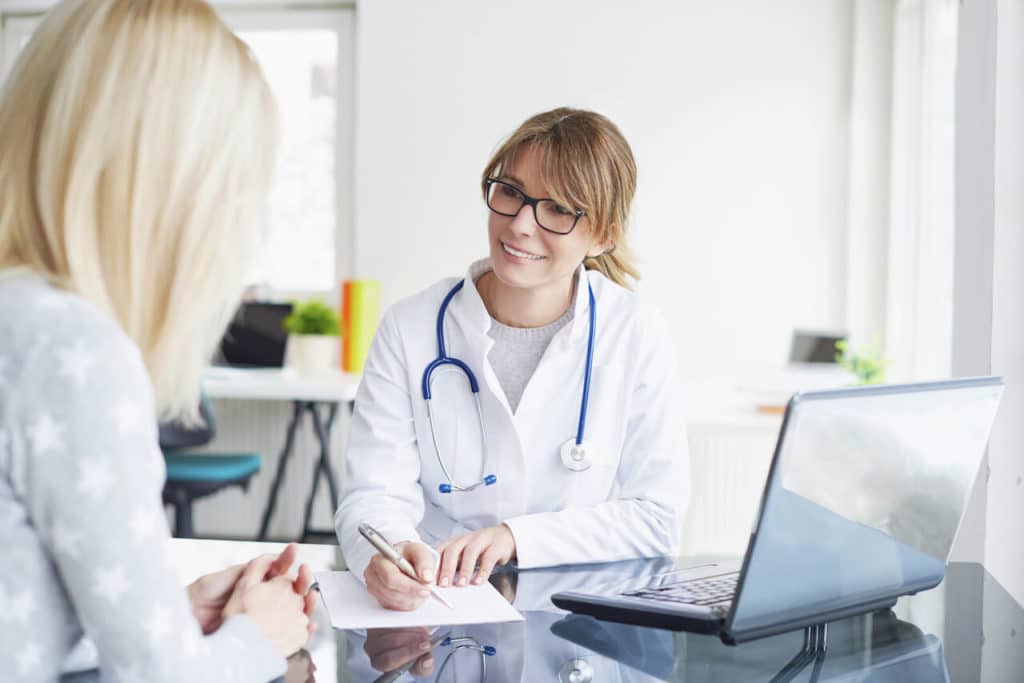 A relatively common and feared condition is thrombosis, a clot in a blood vessel. In most cases, it occurs in the deep veins of the legs, less frequently in the pelvic vessels or the veins of the upper extremities. The risk of thrombosis is increased during pregnancy.

Probably the most dangerous complication here is pulmonary embolism – it occurs when a blood clot breaks loose in a leg vein, is washed into the pulmonary veins with the blood flow, and gets stuck there.

You can find out everything you need to know about thrombosis here.

What Is Thrombosis And How Does It Occur?

Thrombosis is the formation of a blood clot in a blood vessel. Such a clot is also called a thrombus or plug and can theoretically form in all vessels.

However, it most commonly occurs in the deep veins of the leg, which is also known as DVT (deep vein thrombosis). The term “thrombosis” is derived from a thrombus (ancient Greek for lump) and was coined by the Greek physician Galenos of Pergamon in the 2nd century AD. In German usage, the word has existed since 1845, when pathologist Rudolf Virchow, among others, intensively researched thrombosis, its signs and causes.

Because the blood flow is now disrupted, the lungs no longer work properly, causing symptoms such as severe shortness of breath and pain. This complication can be fatal and requires immediate medical treatment. Pregnancy increases the likelihood of developing thrombosis.

A blood clot is formed by physiological blood clotting. Everyone is familiar with this in everyday life: a minor injury, such as a cut with a knife or a banged-up knee, does not usually result in much blood loss because the blood clots.

Also interesting:
Mastitis: Learn All About Mastitis During Breastfeeding

This means that it thickens and forms a tough clot on the wound surface so that the injury is quickly closed and can heal. Within blood vessels, however, this ability to clot is counterproductive, as a blood clot can narrow or block the vessel or become lodged in distant blood vessels as an embolus (= a thrombus that has broken away from the vessel wall and is carried in the bloodstream).

Thrombosis usually results from an interaction of several factors. In the case of venous thrombus, finding the cause requires attention to Virchow’s triad, a description of three major factors that lead to thrombosis.

Excessive Clotting Or Reduced Ability To Dissolve A Clot

Blood consistency can be disturbed by mutations in clotting factors, deficiency of protein-S, certain foods or medications (for example, the contraceptive pill), pregnancy, hereditary disposition, or decreased fluid intake and consequent thick blood.

Blood flow is impeded by varicose veins, pinched vessels, bedriddenness, surgery or long travel. The more turbulence there is in blood flow, the easier it is for clots to form.

Damage To The Vascular Walls

If all three of these points are present, a thrombus is very likely to form. In particular, the combination of birth control pills and smoking has been discussed in the media in recent years.

Thrombosis And Its Symptoms

The recognizable signs of thrombosis depend on the location of the clot. However, since most thrombi develop in the deep veins of the leg, the typical symptoms of thrombosis in the leg are explained here.

It should be said that many thromboses are not noticed at first, because the symptoms can be very weak and non-specific, especially at the beginning. The intensity of thrombosis signs increases with the size of the blood clot.

Also interesting:
Red Moles: A Cause For Concern Or Harmless?

This means that when the first symptoms appear, thrombosis may already be advanced and the clot may have reached an already dangerous size.

Thromboses in the pelvic veins, on the other hand, cause clear symptoms less frequently and later. However, it is these thrombi that are even more dangerous, as they can become larger, increasing the risk of pulmonary embolism.

Pelvic vein thrombosis is more common in pregnant women. A possible clot can break loose after birth due to the sudden relief of the vessel, thus triggering a pulmonary embolism. Because thrombosis symptoms in the pelvic veins are so minimal, it is especially important to take preventive measures during pregnancy.

How Is Thrombosis Diagnosed?

Clinically, thrombosis is very difficult to diagnose because symptoms are not always noticed or are very nonspecific. In many cases, only diffuse and only mild pain is reported.

Only in advanced stages do the symptoms become clearer and more specific. Thus, severe thromboses are recognized by a strong swelling as well as by a strong edema (fluid retention in the tissue).

Less common, but still characteristic, is the so-called Payr sign, named after the Austrian physician Erwin Payr. In this case, there is pressure pain on the sole of the foot that radiates into the leg. Pain in the back of the knee is also relatively specific.

To clinically assess the likelihood of thrombosis, scientist Philip Steven Wells developed a scoring system now known as the Wells score system. Under this system, points are awarded for various presenting symptoms and facts.

One point is awarded for each of the following characteristics:

Two points are deducted if another diagnosis seems just as probable and plausible as thrombosis. In the end, if more than two points are scored, the probability of thrombosis is high.

If there is reasonable clinical suspicion based on clear signs of thrombosis, further investigations may be ordered. From a laboratory point of view, elevated levels of D-dimer (proteins formed during the breakdown of thrombi) indicate a possible thrombosis.

However, since these proteins can also be formed during other processes, they are by no means specific. Therefore, if the D-dimer value is elevated, it is imperative that further examinations follow to confirm the diagnosis. Conversely, however, low D-dimer values together with a low score according to Wells can fairly reliably exclude thrombosis.

Today, a reliable diagnosis can and is made by ultrasound. If there are clear clinical signs of thrombosis, ultrasound examination usually follows directly. Here, Doppler sonography is used to visualize blood vessels and blood flow.

A rather outdated method of imaging diagnosis is phlebography, an X-ray examination using intravenously injected contrast medium (this makes the blood vessels visible in the X-ray).

How Thromboses Are Treated

Once a thrombosis has been diagnosed, there are various treatment options. The most important is the use of anticoagulant drugs, which prevent the thrombus from growing further.

If growth is stopped in this way, for the time being, the body can begin to gradually break down the blood clot again. Depending on the severity, this can take weeks or even months. Support is given to the affected leg with compression stockings so that the blood flow is accelerated and blood flow in collateral veins is prevented.

In the past, care was taken to immobilize affected individuals. This meant that the person had to lie still in bed and was allowed to move the leg as little as possible. This was to prevent the thrombus from breaking loose, for example, due to jolting or increased blood pressure, and causing a pulmonary embolism. This method is now outdated and is no longer used.

After a thrombosis, long-term secondary damage can occur, for example, the veins sometimes remain closed or bypasses are formed. This occurrence is also called PTS (postthrombotic syndrome).

To prevent this, patients are instructed to get plenty of exercise (especially swimming), wear compression stockings, and avoid sitting and standing for long hours.

How Can Thromboses Be Prevented?

If you take a few important points to heart, you can significantly reduce your risk of developing thrombosis.

The most important way of prevention is regular exercise. If you are tied to an office chair for work, you can perform the so-called vein pump, which is firm and tight movements of the foot blades up and down.

You should feel a pulling sensation in your lower leg muscles. The tense muscles increase the pressure on the leg veins and thus accelerate the return flow of blood upwards. If movement is not possible, for example, if you are confined to bed, you can use compression stockings.

These have the same effect as exercise. On long air or car journeys, it is important to stand up regularly and stretch your feet.

To keep the viscosity (viscosity) of the blood flow, you should drink a lot, especially water. The more fluid the blood, the lower the chance of a clot. Coffee, tea, and alcohol, on the other hand, should be avoided, as they draw water from the body.

For long flights, it is advisable to consult your doctor and, if necessary, have compression stockings or heparin (medication to inhibit blood clotting) prescribed.

Excess weight is a cause and risk factor of many diseases and should therefore generally be avoided.

Smoking has a hypoxic (deoxygenating) and vascular wall damaging effect and should therefore be avoided. Damage to the vessel wall increases the risk of deposits and thrombus formation in the area of damage.

3 thoughts on “Thrombosis: How To Prevent Dangerous Blood Clots”